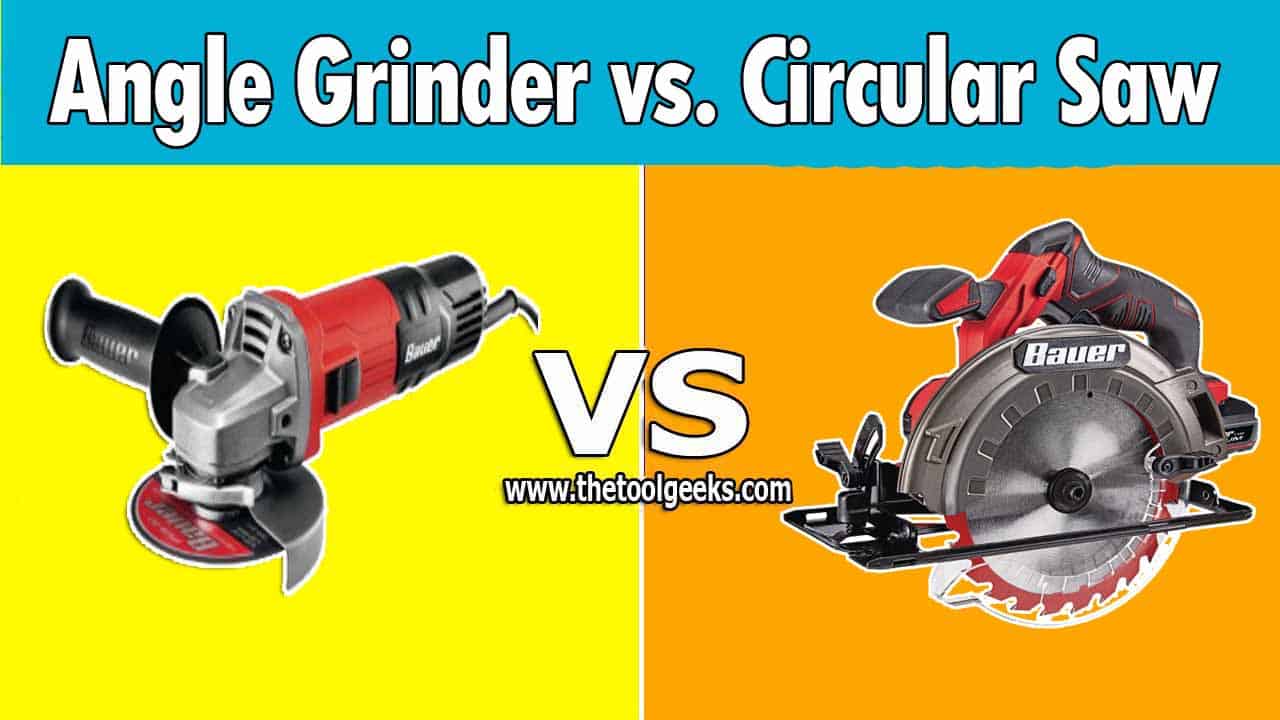 Angle Grinder and Circular Saw are excellent by-products of human engineering that enable constructors, plumbers, carpenters, and others to perform their jobs effectively and efficiently.

Their purpose is to cut through various objects without needing any other conventional tool.

Both the angle grinder and circular saw may seem similar to one another, and their purpose is also alike. However, certain differences make them suitable for use at different jobs.

What Are Angle Grinders?

An angle grinder, also more commonly known as a disc grinder or side grinder, is a freehold tool mainly used for grinding and polishing.

This tool’s offerings are quite vast since it can be used to cut through various objects and surfaces, including metal, marble, stone, wood, and others. Although its usage is more towards hard and thick surfaces, sometimes it is also used to cut wood. 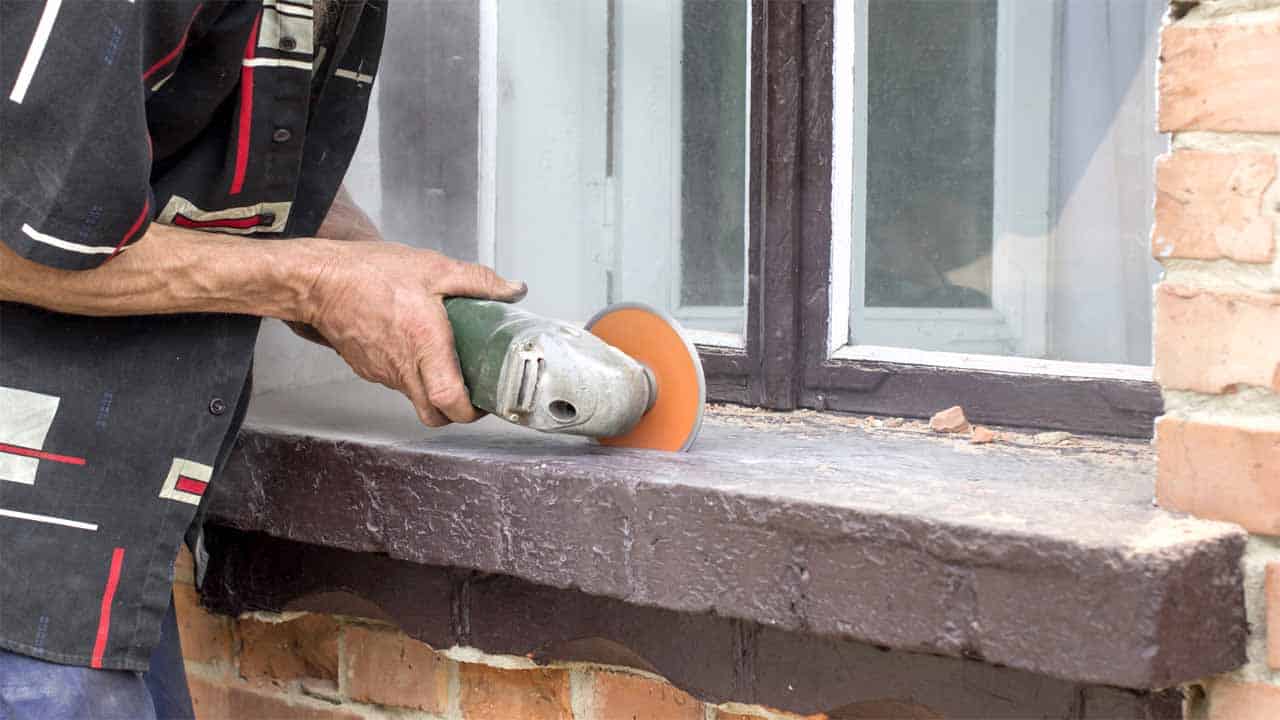 The disc used in angle grinders for cutting is placed horizontally, unlike a circular saw whose disc stands straight.

The angle grinders come in two different variants. One is a wired variant, and the other is a cordless variant. The wired variant is mostly used at construction sites where more power and disc rotation is needed to get the job done quickly.

On the contrary, cordless variants are usually used as a DIY tool in most homes because they are light in weight and can be used with little to no help. They are also more energy-efficient because they use rechargeable cells to power up the motor inside the grinder.

The diameter of the disc in the angle grinder varies between 4 to 4.5 inches, which can rotate between nine to eleven thousand times per minute depending on the wattage of the motor used.

Because the angle grinders are commonly used to cut through metal, they produce shards during the process.

Sometimes, the disc used for cutting also gets damaged as a result of the cutting exercise. Therefore, it is common practice for angle grinder users to change disc frequently to ensure precision and effectiveness during the project.

What Are Circular Saws?

A circular saw is very similar to a table saw or a chop saw, is a tool that is primarily used for cutting wood or wood-like material that shares a similar density.

Although it is not recommended to use this tool for cutting other materials due to its sheer nature, it is sometimes used to cut plastic, metal, and masonry.

A Circular saw is usually powered by electricity, but sometimes it can also be powered up using different modes, including a gasoline engine or a hydraulic motor. 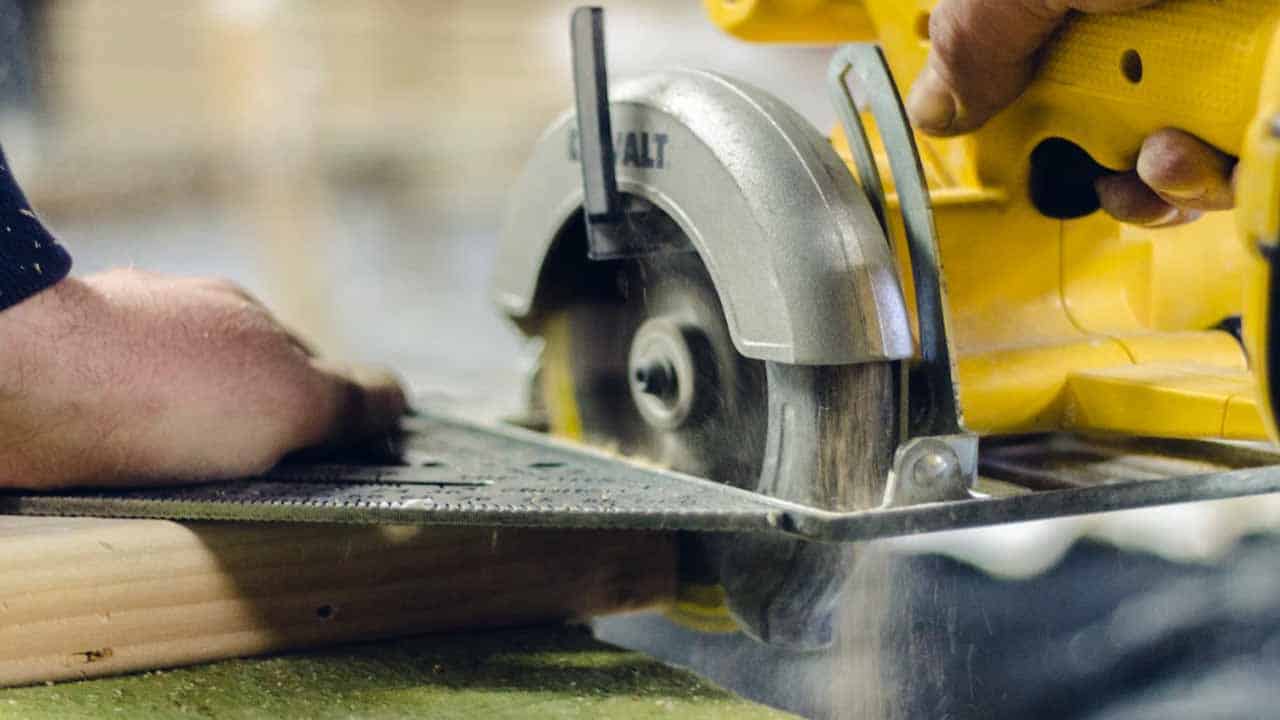 The method for powering up a circular saw depends on the project requirements, particularly when electricity is not present on a site under construction having no electric supply.

The disc of a circular saw is mostly placed in a vertical style, which is one of the prime reasons for the precision and effectiveness during the cutting exercise.

Since it is a rotary tool, it has two different modes of operation. One is a fixed mode, while the other is a hand-held model.

The fixed mode is generally used by carpenters whereby the circular saw is set on the center of a table, and then the wood is passed through it slowly and gradually. Because of the tool’s characteristics and the motion to pass wood slowly through it, the cut that it produces is extremely accurate and straight.

Carpenters also use the hand-held mode to cut wood; however, its usage is limited to small cuts. Using it for small cuts only is because of the precision that is needed in work.

The hand-held circular saw can cut through metal pipes; however, doing so tends to leave burrs on the cuts’ edges. Sandpaper can then be used to get rid of these burrs.

What Are the Differences Between an Angle Grinder and Circular Saw?

Now that we have a fair amount of idea about the angle grinder and circular saw, let us dive our noses right into the differences between them.

The Angle of Blade

The blade’s placement on both the angle grinder and circular saw is quite the opposite. You would notice that the blade is parallel to the motor powering in the case of an angle grinder.

Whereas in the circular saw’s case, the blade is perpendicular to its motor. This is the most obvious differentiating factor as it defines the usage of the two different tools.

The blade’s placement in the angle grinder makes it suitable for both cutting and sanding exercise, while in the latter’s case, this is not possible due to the disc’s vertical placement.

The angle grinders have been designed for using it as a free tool. On the other hand, circular saws are generally used after being fixed to enable the wood cutting exercise.

For many reasons, angle grinders are used as a free tool because they are often needed to sand and cut difficult surfaces.

At the same time, the circular saw is fixed to ensure precision and utmost accuracy in the cutting of the wood.

Circular saws can be used as a free tool in specific scenarios; however, they are generally not recommended to be used as such because of the need for accuracy.

Read More — Can You Cut Metal With an Angle Grinder?

When it comes to versatility, the angle grinder is a straight winner. This is because there are no limitations to using an angle grinder.

It can be used to cut various surfaces, including metal, plastic, stone, wood, etc. Not only can it cut, but it can also be used to sand those surface areas.

On the other hand, the circular saw is generally limited to cutting wood or wood-like surfaces due to its design and blade placement.

You can use a circular saw to cut through plastic or pieces of metal, but at the end of the exercise, you would need sandpaper to get rid of burrs leftover by it.

Because the circular saw is used for cutting wood and the angle grinder is used for shaping, grinding sanding metals, and other thick surfaces, they both are made up of different materials.

This makes them suitable for the jobs they are manufactured for use. It does not necessarily mean that you cannot use a circular saw to cut something other than the wood and angle grinder vice versa.

You can still use them for other jobs; however, it is not recommended by the manufacturer and experts in the market.

Since we have now established that the angle grinder is more versatile, with versatility comes a decline in speed.

Because the tool is not manufactured for one specific purpose and is used mostly in a hand-held mode, it takes quite a bit of time to get the work done using an angle grinder.

On the other hand, the circular saw is built to cut wood and wood-like surfaces. Since it is only used for cutting, getting the job done takes significantly less time than the angle grinder’s speed.

The design of the circular saw is made to produce cuts with the utmost accuracy and precision. This does not mean that an angle grinder cannot cut with accuracy.

It can do that as well; however, the accuracy aspect will depend on the tool’s user. On the other hand, since circular saws are generally used in a fixed position, they can produce fine cuts that are needed in the case of wood cutting and designing.

If you use the circular saw in a hand-held mode, the accuracy aspect will depend on your patience and skillset.

Both the angle grinder and the circular saw are easy to use, given that you follow the instructions mentioned on the user manual accompanying your tool.

Because the angle grinders are used as a hand-held tool, they are pretty much ready to go having worn appropriate safety gear.

On the other hand, if used in a fixed mode, a circular saw needs some setup, which may take some time before it is ready for use.

Can You Use an Angle Grinder as a Circular Saw?

Answer: You can use an angle grinder to cut wood after purchasing some extra tools and fitting them with your grinder.

These may include a three-teeth angle grinder blade that can concussively slice through any wood. While purchasing it, just ensure that the blade’s speed matches with the power of your grinder to ensure optimum performance.

Can You Cut 45-degree Angles Using a Circular Saw?

The trick is to fix the wood and carefully line up the blade at a 45-degree angle. Just ensure that the wood does not slip; otherwise, it may not produce a fine cut.

Answer: A circular saw can easily cut wood with a density of 2×4 inches. The process may be a bit noisy; however, the outcome will produce an optimum and precise cut. Learn more on how to cut 2×4 with a circular saw?

We hope that all the questions you had in mind have been covered in this article. Now it is up to you to decide whether you need an angle grinder or a circular saw.

If your activity will revolve around cutting wood, then it is recommended to purchase a circular saw. Whereas if you are cutting various kinds of objects, you should opt for the angle grinder’s route.