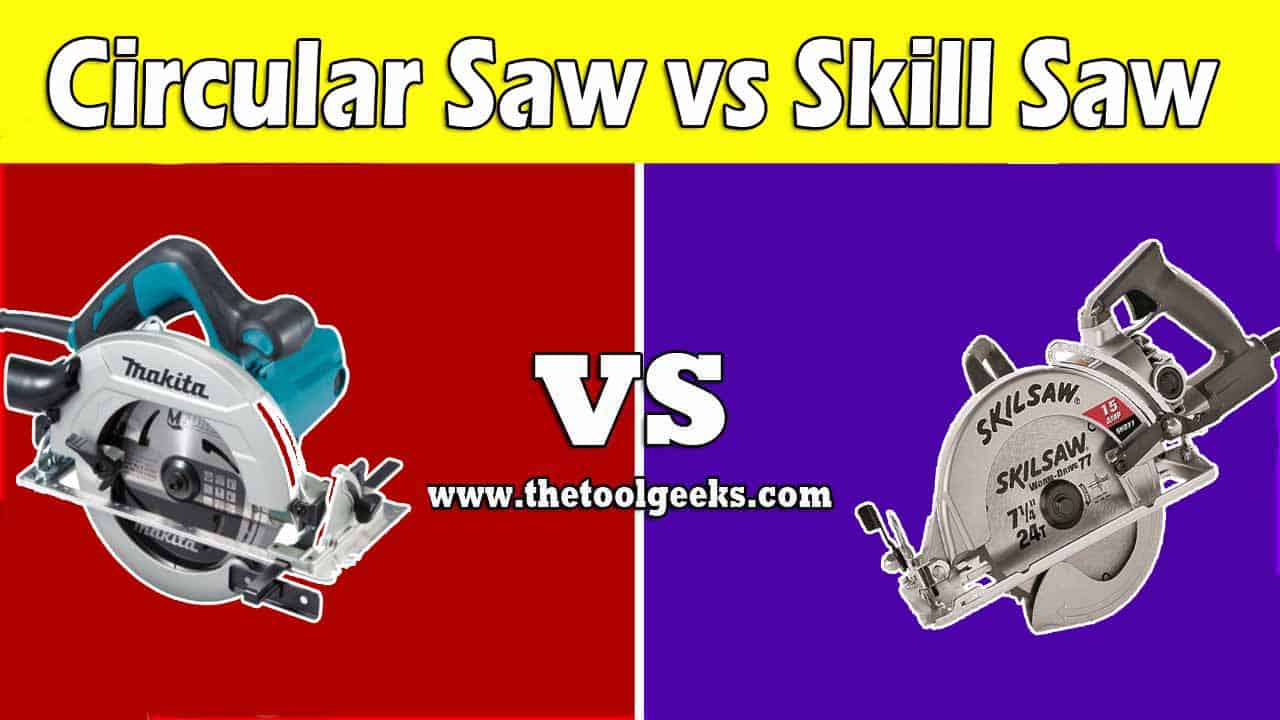 If you have any experience with woodworking either as a professional carpenter or a DIYer, then chances are you might have heard of the circular saw and the skill saw. You might have seen or used one or both yourself. Both saws are very much identical in their build, structure, and functions. This then makes you wonder if there is any difference between both power tools. Well, there is.

While both saws are to a very large extent identical, they still have some differences. So, what differentiates the circular saw vs skill saw?

Think of it as differentiating between a shelf and furniture. A shelf is a type of furniture but not every piece of furniture can be used to store or keep things.

Are you still confused about both power tools? Don’t sweat it, after all, hundreds of professional carpenters still use both terms (circular saw and skill saw) interchangeably. So, it’s only normal to think both power tools are the same.

Luckily, this post will introduce you to and explain all you need to know about both saws as well as tips to help you identify them and discover which of the two you will need for your task.

So let’s get on with it.

What Is a Circular Saw and What Is It Used for?

Circular saws are handheld power saws popular for their mobility and power. The circular saw can make several cuts at varying depths.

Circular saws come in both corded and battery-powered models. They are also popular because the saw can make cuts at varying depths. 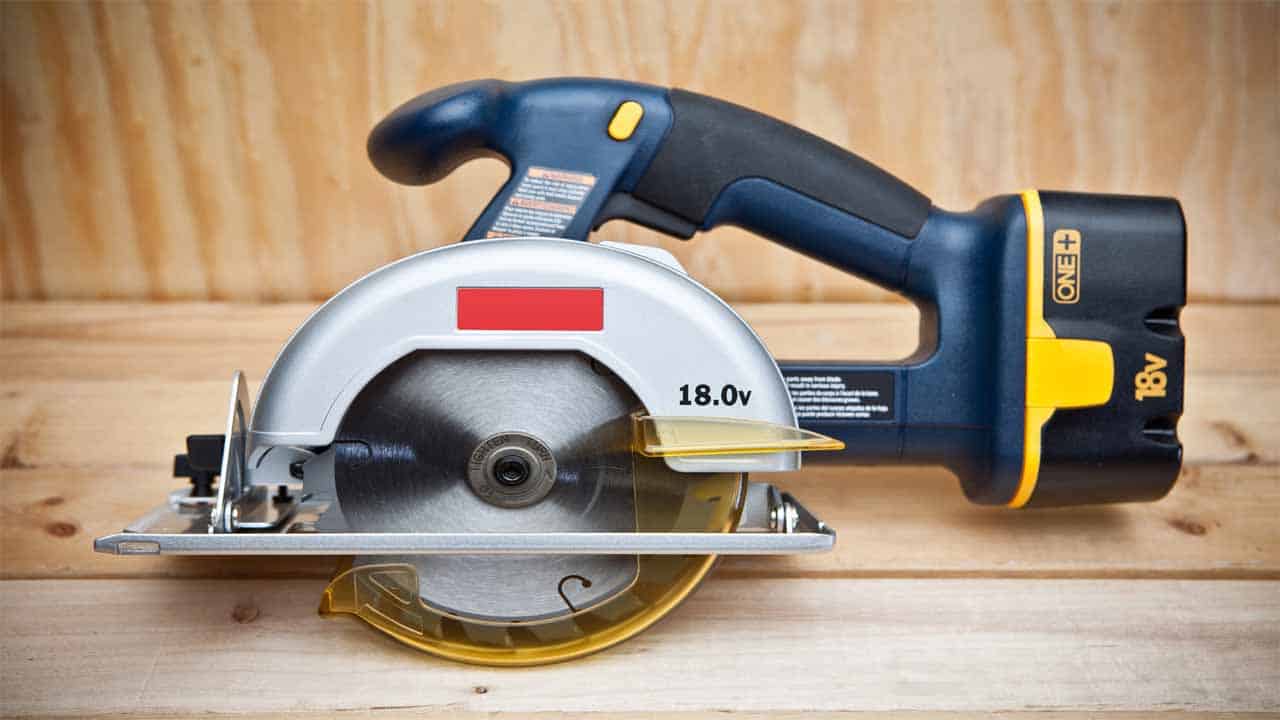 Circular saws are used by both carpenters and construction workers because of the saw’s power and lightweight which makes it very mobile. The saw is also very versatile. In the hands of an expert, a circular saw can make different cuts though the saw is popular for re-sawing and for making straight cuts.

The power of the circular saw makes it possible for the saw to cut different materials ranging from wood to steel and even concrete. This is one of the reasons the saw is very common. As long as you use the right blade and you are experienced, you are good to go. The main strengths of the circular saw are its power and mobility. Now let’s check out skill saws.

What is a Skill Saw and What is it Used for?

A skill saw as stated earlier is a type of circular saw. Skill saws are very popular because they have been in existence as long as circular saws.

The most popular type of circular saw you will find in the market is the skill saw and this is why many people refer to the circular saw as a skill saw. 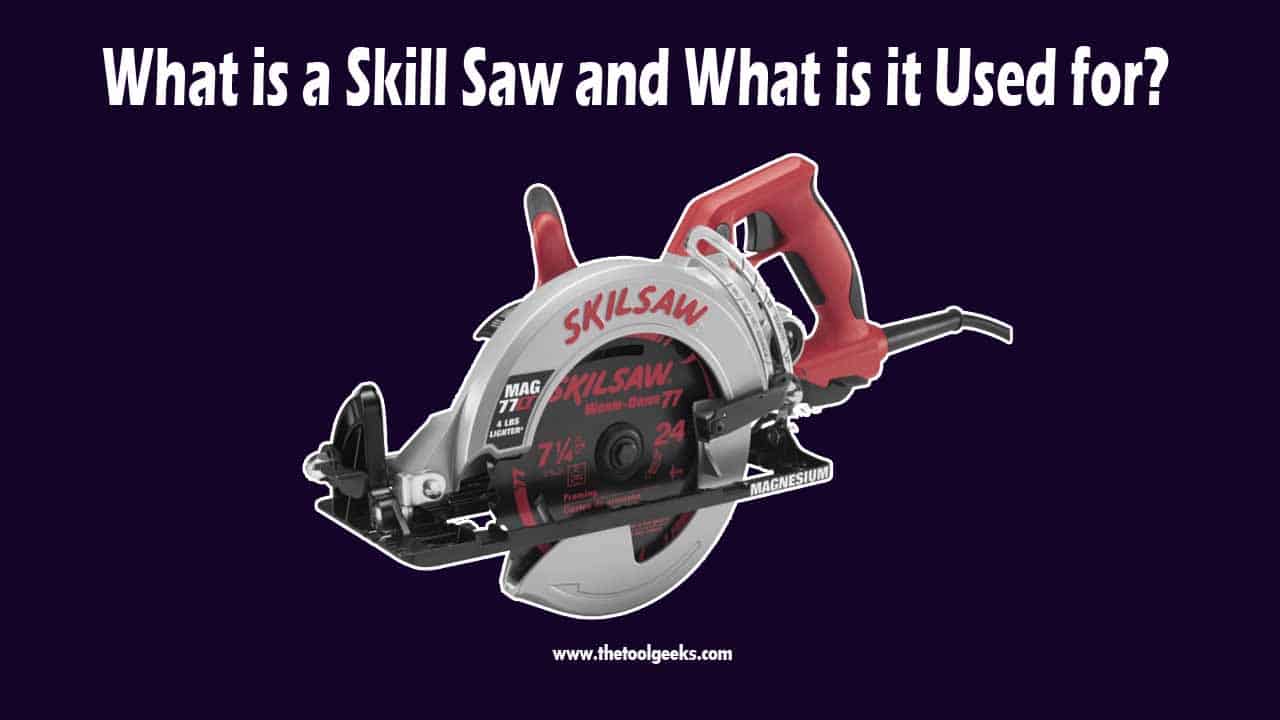 Skill saws can also be used for different types of cuts. A major advantage of skill saws is that they are the best circular saws out there. They can go toe to toe with virtually any brand of circular saw you will come about. Skill saws are incredibly powerful and versatile. The skill saw when attached with the right blade can saw through solid concrete and masonry.

Skill saws are popular for cutting timber into sizable logs and also for cutting across and along the grain of the wood. The skill saw isn’t exactly used for its accuracy or its versatility.

It is rather used for straight and square cuts on different materials. Skill saws are popular among woodworkers and construction workers that deal with a lot of heavy-duty cutting and re-sawing. The main strength of the skill saw is its power. Now let’s check how skill saws fair when compared to circular saws.

Before moving on, you should note that the basic difference between both power saws is in the name. Though there are other differences that this post will examine, the basic difference is that circular saw is a type of power saw and is a term that is used to refer to different types of saws such as miter saws, small table saws, and even skill saws. Skill saws on the other hand are a type of circular saw just like miter saws are.

So now that we are done with the names, let’s dive into detail and compare both saws using their features.

When it comes to power saws, speed matters a lot. The speed of the saw determines how fast it can cut through the material and this also determines how quickly you can finish your task. What determines a saw’s speed is the amperage of the motor as well as the size of the blade being used. Generally, smaller blades spin faster than bigger blades.

In terms of speed, skill circular saws are very fast saws and one of the fastest in the market. A skill saw can spin a 7½ inch blade as fast as 5000 RPM (Revolutions per minute). The bigger blades like the 10-inch circular blade can spin as fast as 3500 RPM. Though this speed is fast, it’s not the fastest.

With power saws, one factor that determines how easy the saw will be to use is the accessories and components that are designed with the saw. In this battle, circular saws win again.

Different circular saws have several components and accessories that make usage easier and safer. The Makita circular saw for instance comes with two led lights which means the saw can be used late in the day.

This might be important to you if you have a large task that might take you all day to complete. Skill circular saws on the other hand don’t come with led lights.

TACKLIFE circular saws also come with 5 additional blades with different thicknesses and use. Skill saws usually come with only one blade.

This is not to say skill saws aren’t great with accessories. It’s just that skill saws have accessories that most circular saws also have. The 5280-01 skill saw for instance comes with a laser beam that helps you with straight cuts. The TACKLIFE circular saw also comes with this feature.

The power of your saw determines the type of task you will able to take on with the circular saw. All circular saws are known for power because they make light work of the hardest of materials. However, the skill saw is perhaps the most powerful circular saw you will find out there.

The 10-inch blade of the skill circular saw is capable of ripping boards with ease. The blade can also cut and resize timbers, thick boards, heavy logs, and other tough materials in one go.

If you wanted to build a deck, a wooden pillar, or any other tough wooden structure, a skill saw will be your best bet. Powered with a 15amp motor, the skill saw is powerful and is suited to heavy-duty cutting that most circular saws wouldn’t be able to take on.

A huge determinant of which saw you go for is the cost of the saw. In terms of price tags, skill saws are costlier than many other circular saw brands.

Though cost matters when buying a new power tool, you shouldn’t sacrifice quality for the price. If you go for a circular saw because of its lower price, chances are the saw wouldn’t last long and you will need to invest in another circular saw again.

No one wants a circular saw that wouldn’t last long. In terms of durability, Skill saws would last longer than most other circular saw brands in the market.

A huge determinant of this is because Skill saws are generally designed for heavy-duty cutting and this makes them last longer since the Skill saw has already been designed to cope with heavy usage and tough materials.

Skill saws have been in existence for decades and they are still the top choice when it comes to circular saws. This shows you how durable the Skill saws are.

Many of the circular saws made today can’t compete with the Skill circular saw in terms of durability. This is because many manufacturers today tend to produce saws that are cheaper than the competitions’.

In a bid to arrive at a cheaper retail price, some of the saw’s features aren’t exactly built to last. Most parts will be made from plastic and cheap metal. While Skill saws can last for years, other cheap variations might give way after a few months of consistent usage though some will also stand the test of time.

When it comes to buying one, the choice ultimately depends on you. If you want a circular saw that will stand the test of time and one that is very powerful, then the Skill saw is your pick. However, if you want a different brand or you want a cheaper alternative to the Skill saw, then you can choose any other brand of circular saws.

There are several brands out there. You can go for the MAKITA, DEWALT, TACKLIFE, or any other circular saw brand. The bottom line is to pick a brand and a saw that will suit your task and one that will be convenient to use.

So there you have it. If you have any questions or comments about the topic, kindly leave them below in the comment section and I’ll attend to them as soon as possible. Have a nice day.