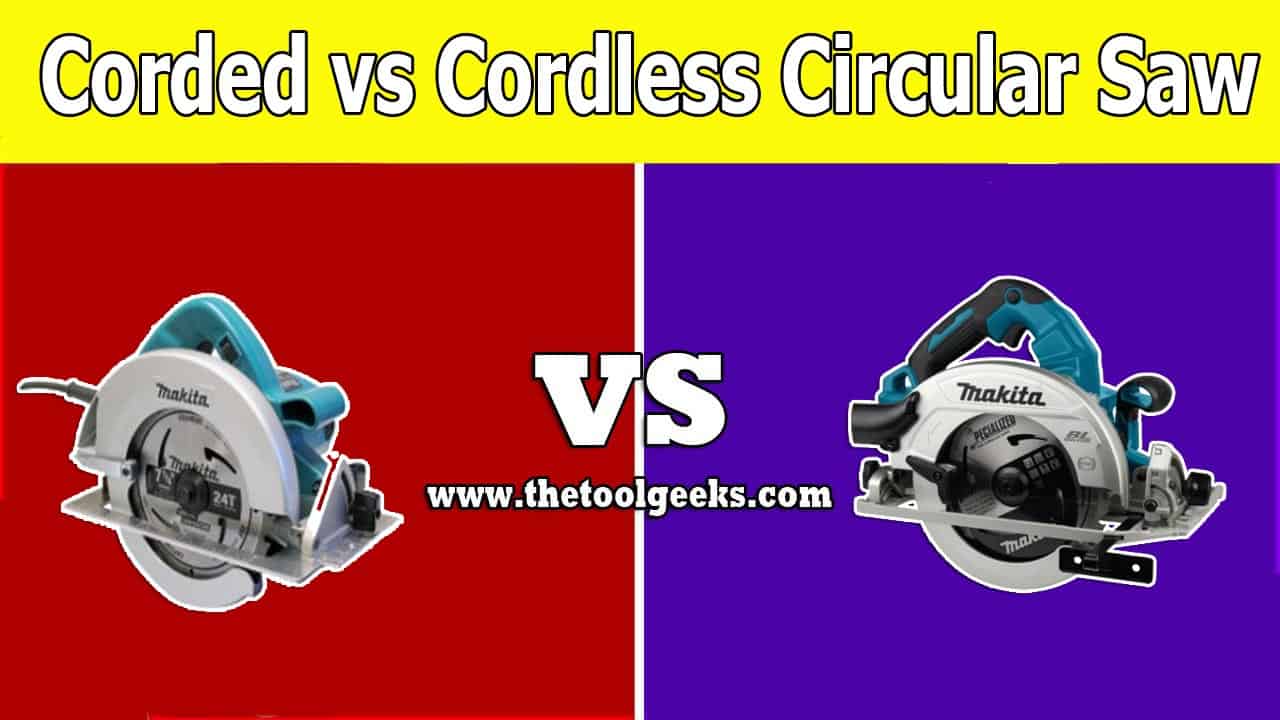 Circular saw is the most popular and most commonly used saw. It can cut many materials not only wood but also cement, metal, plastic and so much more.

It has a wide range of users with which they can perform dozens of jobs. Most common users of this saw are electricians, carpenters, masons, or construction firms.

When it comes to circular saw there is the dilemma whether to use a cordless saw or the corded one. To make it easier we will be writing about the advantages and disadvantages of these circular saw models.

Circular saws are designed specifically for cutting straight lines. It has a circular blade in the middle and the base is big to match the material on which you are working.

The majority of the models are adjustable for you to make any kind of cut. The circular saws are designed in various sizes, each dependable on what kind of blade’s diameter they use.

This model is the first model of the circular saw. The obvious difference, when comparing corded with a cordless circular saw, is the power source.

The corded circular saw takes power from the electrical outlet. Because of this, the corded saws provide more power than the cordless ones, however, this model is restricted by its cord.

The very act of constantly taking energy from the electrical outlet makes it possible for the corded model to maintain the same level of power during the entire cut.

It is mostly known for this performance as well as its ability to make even the toughest cuts.

The corded circular saw is created with many motors and blades. Also, there have been designed many options to enhance performance and accuracy.

The incredible power of the corded model tolerates even the toughest materials. For this reason, it makes this model a heavy-duty tool that can complete any task.

Except for the fact that it is incredibly powerful, this saw is also pretty light weighted. On average it weighs from 7 to 12 lbs.

Furthermore, the blade’s teeth are positioned to a pattern from 32 to 80 which makes it perfect for any task, as mentioned above.

What is impressive about this mode it’s the impressive deep cuts and bevel stops. This option it’s created in most circular saw models.

Surely, as many saw this too has its weak spots. Because of its cord, this saw does not provide much mobility and your movements are limited.

Drawing power from the electrical outlet is both good and bad. The good side is that the saw’s power will last for as long as you need but the bad side is that the tasks you can complete with it are only a few. With this saw everything depend on the outlet accessibility.

The corded saw is mainly safe. Its only threat is that during the work you can cut the cord. So during the use, if this saw the user must be aware of the cable at all times.

Related Read — Do you need a Plunge Saw or a Circular Saw?

This model has been out in the markets just recently. The name cordless came from its design, a circular saw without a cord. As opposed to the corded model the cordless saw uses batteries as a power source. The batteries are installed inside the cordless saw.

You merely have to recharge the batteries for at least one hour then you are free to go. This feature allows you to move freely around the workshop or where it is that you are trying to do the job.

Mostly they are used in workshops and are perfect for areas that are larger and more confined. However, this cordless model is mostly used for wood cutting tasks which drain less power. Its limited power makes this saw perfect for light works.

Related Read — How to Cut Concrete Block With a Circular Saw?

Both models of the circular saw have some resemblances in their designs such as their motor and their blade. As well as some of the functions like bevel stops, dust blowers, and lasers for accurate cuts.

Nevertheless, the most distinguishable feature is the cordless saw’s battery. These batteries are designed to last much longer with just hours of charging.

Also, they contain technology for overloading and overcharging. This technology increases the life of the circular saw as well as the quality of cuts.

The cordless circular saw is equipped with powerful motors. Most of them are brushless for them to reaming active for longer periods. Some cordless model has an RPM speed up to 5.200 while some of them are lighter, their weight is an average of 6.8lbs.

Even though this most model has been released recently in the markets, there is still an older version of this model.

The younger models have been improved and have no drawbacks whatsoever. But the older version has a weak point when it comes to the battery.

Their batteries drain quicker and you have to replace them often. Furthermore, some batteries are heavier and add weight to the cordless saw, this can cause fatigue to the user more quickly.