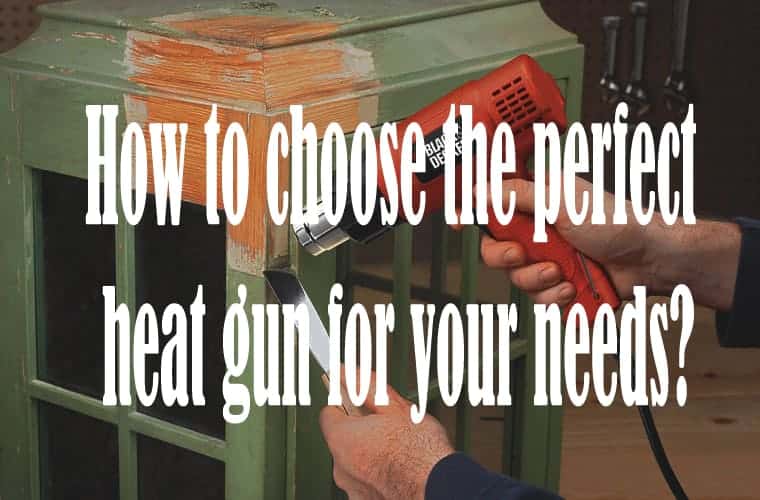 You may think that heat guns are not very important and only people who need to use them on their daily basics buy them, but you would be surprised to know how many people buy heat guns and just leave them there because they know that they will be needing them soon.

But if you never used a heat gun and if you don’t know anything about them then it’s hard to choose the “one” that you may need. There are many reviews about how to choose a heat gun and honestly, they are very confusing. In order to choose the heat gun you need, it depends on what you are going to use it.

Lets just say you want to change your iPhone screen and you need to heat the screen a little in order to get it out better, and you may never use it anymore (until your screen breaks again haha) so you go on google and see the reviews and you see different heat guns, from the ones with 2 temperature range to the one with LCD and temperature control.

So which one is the one you need? I have to say that if you need a heat gun for most small tasks then you should take a small heat gun that you can easily control, which has 2 temperature ranges and heats fast so you don’t lose time waiting for them to heat. So, it’s really easy to choose a heat gun if you know that you will use them only for small tasks.

But if you need heat guns for medium and big tasks then it becomes harder and more confusing, let’s just say you need a heat gun to remove paint. If you buy a small heat gun for this kind of project then you may end up holding the heat gun for hours just to remove a small piece of paint. Now imagine how much time it will take you to remove paint from a big surface.

If you take a big heat gun that can heat up to 1200 degrees and if you are a newbie then you can destroy the object by overheating it. In this case, your best option is to read the reviews carefully on the internet and try to find the perfect one. I have to say that my “perfect” heat gun is the one I can control the temperature really easy.

On our reviews about heat guns, we have mentioned the pros and cons of the top 5 heat guns we have ever used and the top 3 we have chosen all of them have LCD screen and buttons to control and know the exact temperature of the heat gun. Coincidence? I think not.

You can check our other reviews, such as Dewalt Heat Gun Review here.

Why do we love heat guns with LCD screens? 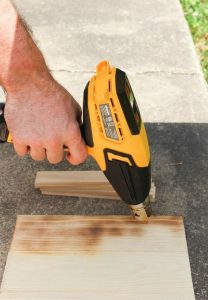 We love them because the control is easy and beautiful, they are really good heat guns that make your work really easy. The button that increases or decreases the temperature helps a lot especially if you are working with surfaces or objects that you need to warm slowly before heating it.

Usually, heat guns with LCD screen come with a button that allows 20 degrees/50 degrees adjustment of temperature, and at the same time shows the exact temperature on the screen. Cool, right?

There are many uses of LCD screen that will help you, another good feature is that it shows the exact temperature which helps you if you are working on a small and sensitive object like PC stuff that needs exact heating, and if you heat them with more temperature that they can handle then you may overheat them and they will be permanently destroyed.

In today’s market, there are a lot of different heat guns starting from electric heat gun, gas-powered, infrared and industrial heat gun. Down below we have explained what they are and how to use them, hopefully, that will help you to decide which one you need.

According to its name, you probably have guessed this one too on how it works and what is this power source. These kinds of heat guns are really cheap and small, they are mostly used for small tasks and they work with gas. If you don’t know how to use them then they can be very dangerous especially if you have a naked wired that can cause flares.

If you want a cheap and small heat gun that doesn’t blow hot air from it but it still heats the object then this is your go. Usually, they don’t heat a lot, from 400 degrees to 600 degrees but they can be very useful and they are safer than the other heat guns.

According to its name, you may have figured out how this type of heat gun works. It uses electricity as its power and its probability the most used heat gun. Usually, the temperature range for this type goes from 600 degrees to 1000 degrees but there other models that go way lower and way higher.

We have two types of these heat guns, small and big ones. The small ones are mostly used for small things and small objects like shrink wrapping items, and mostly for home use. And then we have the big ones that heat a lot and heat super fast, they are mostly used for big objects and big tasks like removing paint from a wall and/or any industrial job.

Now electric Heat Guns have finally replaced the ‘old fashioned” bottled gas blowlamps, but not completely since we can use bottles gas blowlamps on places where there’s no electricity or on kitchen for different small things, but still we have to be careful with them especially when trying to heat something that has glass since it can crack it because bottles gas blowlamps do not have a good temperature control.

Because of these things, like no temperature control and being more dangerous people use heat guns instead of bottled gas blowlamps.

What Heat Gun Features Should You Look For? 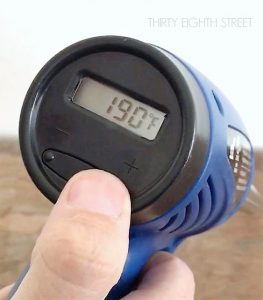 As we have mentioned earlier, heat guns are very important to have in your house since you can use them for a lot of things, like replacing an iPhone glass/screen, shrinking objects and a lot of different things.

There are a lot of different styles and models of heat guns and all of them have different features. Down below we will list the things a good heat gun should have in order to help you do any task you have with them easier.

Why do you need a heat gun that heats fast? Well, not everyone has the time to wait for slow heat guns, most of the heat guns heat up really fast usually they take up to 30 sec to 1 minute to reach their full temperature. If you have a heat gun that takes more than 1-2 minutes to heat up that means your heat gun is really bad and you have to start looking for a new one since that one is not gonna work in the near future.

Most basic heat guns do not have a big temperature range which is bad. They only offer 300 or 1000 degrees which may be enough but also not enough depending on the task you need to do.

Mostly new and good heat guns have a big temperature range which helps you do small and big tasks with only one heat gun. Having a small range can force you to overheat an object since you do not have any other choice of the temperature.

I have to say that this is maybe the most important feature to have on your heat gun. If you don’t have the temperature control feature then your heat gun is pretty much a basic one and you are more likely to destroy an object with it than to fix it.

Are heat guns with LCD Screen cool? Yes. Should I buy a heat gun with an LCD screen? Yes. The LCD screen helps you a lot especially if you don’t want to overheat the object you are working on.

Usually, the basic heat guns with no good feature only have 2 temperature range and you can choose one or the other one. But if you are working on objects that can get overheated or get permanently damaged then you can’t heat them with basic heat guns, and here comes the LCD screen in use.

LCD basically shows you the exact temperature that the heat gun is blowing at that very moment, and usually, every heat gun with an LCD screen has the “Temperature Control” which we mentioned earlier. A combination of these two will make your work with heat guns really easy.

Have you ever worked with a heat gun for some days or some months at the maximum heat and then the heat gun just stopped working for no reason, or it just started to blow cold air and not hot air like its supposed to? If yes that means that even if the parts of the heat gun have been overheated the heat gun didn’t stop to cool down, so after a while the parts inside got permanently damaged.

As we have mentioned on our post [safety tips when using the heat gun], that you need to wait a few minutes for the hot air to cool down until you can put it back to its place because it can and it will damage the place you put it on. The “Cool Down” feature will help you cool down the heat gun faster.

You don’t have to wait for 10-20 minutes for the tool to cool down itself, you can just put the tool on “Cool Down” for 2-3 minutes and you are good to go. If you don’t already know, this feature makes the tool to blow cold air instead of hot air. You can use this feature on objects too if any of the objects you are working needs to cool down faster.

Nozzles are a “must” for your tool. If you don’t already know nozzles are some small parts that you can put in front of the heat gun that helps you aim the heat better. There are 5 kinds of nozzles (Main, Glass Protector, Reducer, Flat, Reflector)