The world of woodwork and joinery is riddled with several power saws, each with its unique features, uses, and specifications. This makes it confusing and difficult to decide on which of the saws to get.

Finding the best power saw for your task without proper knowledge about the saws available will be like finding a needle in a stack of needles. Yeah, you read that correctly.

While working on wood, you will need to make curved cuts especially when you are building shelves, dressers, or cabinets. When it comes to making curves and cutting the edges of the wood, the jigsaw and bandsaw are at the top of the list, so what’s the difference between jigsaw vs bandsaw?

The simple answer is that the jigsaw is a small handheld saw used for small cuts while the band saw is a larger power saw used for large-scale cutting but that’s not all.

Let’s start by taking a look at the jigsaw.

What Is a Jigsaw and What Is It Used for?

The jigsaw is a lightweight handheld power saw that looks like a pressing iron. Jigsaws are used to make curved cuts on different materials including wood and metal.

The jigsaw uses a short thin reciprocating blade to make cuts and shapes. The blade of the jigsaw protrudes below the saw and it cuts the material in an up and down motion. 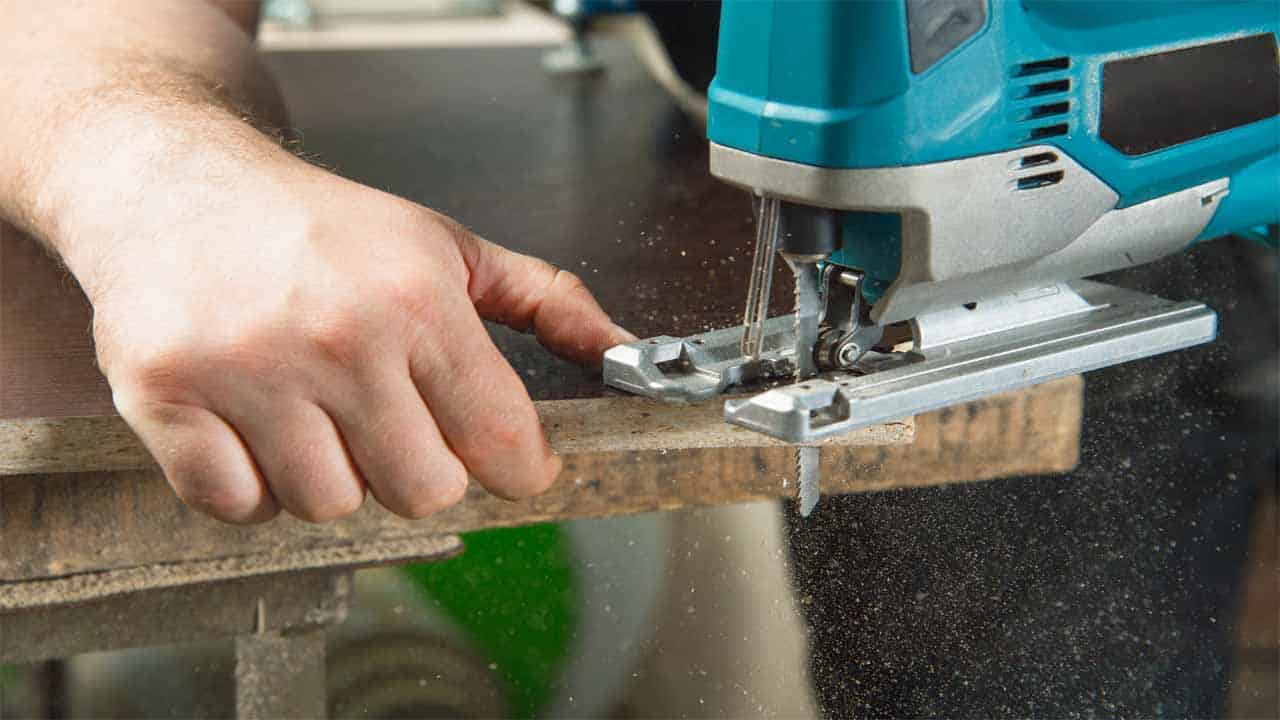 Jigsaws like many other power saws have different types of blades. The blades are differentiated based on their size and the number of teeth. Thin or tiny blades are used to make the most accurate cuts while larger or wider blades are more suited to rough cuts.

Jigsaws come in both corded and battery-operated versions. It is a popular tool amongst beginners and professionals because it is easy to use. Many professional carpenters use the jigsaw on job sites and in the workshop to make curves, patterns, and shapes on different materials. Now, let’s take a look at band saws.

What Is a Band Saw and What Is It Used for?

The band saw is a bigger power saw than the jigsaw. Band saws usually have a long belt-like blade that is attached to different wheels or discs located inside the saw. The motor spins the long blade around the wheels which makes it possible for the blade to spin and make cuts without tangling.

The method of cutting on the band saw depends on the model you have. For instance, vertical band saws usually have the blade lowered on the material by hydraulics located behind the saw while for horizontal band saws, the material to be cut is fed into the path of the blade.

Band saws are versatile. They are mainly used for re-sawing wood and the position of the blade makes it possible to make straight cuts, curved cuts, and designs on wood. Band saws are common amongst DIYers and professionals that deal with precision cuts and designs such as making cuts for molding, trims, edges, and the likes.

Jigsaw Vs Bandsaw: Head to Head

Though both saws are used to make virtually the same types of cuts, there are still some basic distinctions between both power saws, so let’s check out the differences.

When comparing power saws, the blade is always a good starting point since that’s the most important part of the power saw. Both the jigsaw and band saw use a thin blade with teeth to make curved and straight cuts. The difference comes in terms of the size and length of the blade.

Jigsaw blades are way shorter than band saw blades. An average jigsaw uses a 4-inch blade to make cuts on the material through some jigsaws use 6-inch blades. However, even the 6-inch jigsaw blade can’t compare to the blade of a band saw.

The band saw blades are so long that they are wrapped around wheels in the saw so they do not tangle and when the blade is not in use, the blade is usually folded repeatedly to store it. That gives you an idea of how long the blade is.

When it comes to the size and weight of both power saws, the band saw wins fair and square. Band saws are heavier and larger than jigsaws.

While jigsaws are handheld power saws, band saws need a workspace to be used. On average, a jigsaw can weigh between 30 pounds and 70 pounds depending on the model you have. Battery-powered jigsaws usually weigh more than corded jigsaws because of the extra weight of the battery.

Band saws on the other hand weigh more than jigsaws. Horizontal band saws for instance can weigh well over 250 pounds. It’s worth mentioning that some band saws advertised as mini band saws or portable band saws can weigh as low as 15 pounds. Many of these band saws have a case for transporting the power saw from one location to the other.

Though these band saws weigh considerably less than the average band saw, you should know you can’t do much with them. Mini band saws are a popular tool amongst craftsmen, architects, and artists that deal with small wood and carvings. For a professional carpenter or an experienced DIYer, you will need a bigger band saw because the mini band saws wouldn’t help you do much around the workshop.

Both saws have a similar function. Both the jigsaw and band saw are used to make straight cuts and curves on different materials. The difference lies in how well they can make the cuts and how versatile the power saw is.

Jigsaws are used for thin cuts on wood. The thin and short blade of the jigsaw makes the power saw capable of making narrow cuts. The band saw on the other hand is more suited for broader cuts. Though the band saw also makes narrow cuts, the cuts can’t be compared to that of the jigsaw because the band saw has a broader and longer blade.

Benchtop band saws are also used for re-sawing and making cuts across the grain of the wood. Jigsaws are more suited to short and rough cuts. If you would want to cut across a board, a band saw will be your best bet.

In terms of accuracy, the jigsaw comes up short. Jigsaws vibrate a lot while cutting and the accuracy of the tool depends on the skill of the user.

Band saws on the other hand are stationary power saws that do not need to be lifted or moved around. Most band saws have a vise clamp that holds the material to be cut firmly while the blade cuts.

The presence of the clamp and other features such as the table and the position of the blade make the band saw more accurate than the jigsaw.

Though jigsaws are convenient power saws, the tool is more suited to making rough cuts on materials.

Though both power saws have different methods of measuring their speed, the band saw is still faster than the jigsaw. An average jigsaw blade reciprocates at about 1500SPM while the average band saw blade can be as fast as one thousand feet per minute.

With a band saw, you can cut multiple boards at once by stacking them up. With a jigsaw, you can only cut one board at a time. Jigsaws are limited when it comes to both the speed of the motor and the cutting action.

If you have a large task on your hands or you have multiple cuts to make, a band saw will be your best bet. The speed of the band saw makes it capable of making quick work of large materials too.

When it comes to versatility, the jigsaw wins hands down. In terms of materials, jigsaws can cut virtually any material when attached with the right blade. Jigsaws due to the different types of blades available can cut different materials with relative ease whereas the band saw is largely limited to plastic and wood except for metal band saws that are designed for cutting metal.

Jigsaws are also capable of making different cuts. With jigsaws, you can make straight cuts, curved cuts, and a whole lot more. A major strength of the jigsaw is that it can make cuts in wood without cutting through the wood. You can cut circles and other shapes in wood or plastic with a jigsaw. That is not possible with a band saw.

Related Read— How to Cut Plexiglass with a Jigsaw?

Band saws on the other hand require a much more extensive cleaning routine. This is because of the internal parts the band saw has.

Moving parts like the motor and wheels need to be cleaned and oiled regularly to prevent rust. You also need to fold and store band saw blades correctly.

Should You Buy The Bandsaw Or The Jigsaw?

Either of the two power saws will be a great addition to your list of tools. But which of the two saws should you buy? The answer to that question rests on different factors.

Experienced carpenters and DIYers can opt for a jigsaw rather than a band saw. In the hands of a professional, a jigsaw can make just about any type of cut when attached with the right blade. Beginners on the other hand should stick with band saws for a start.

Band saws because of the extra features are very easy to operate. You can also cut different materials with a significant level of accuracy. This makes it the best tool for beginners who just want to start their woodworking journey.

The task at hand determines the power saw you buy. If you want to make accurate cuts for crown molding, baseboards, shelves, and the likes, you should get a band saw. If you aim to make rough cuts or you want to make holes and other designs in wood, then the jigsaw will be your pick.

The task also focuses on size. How large is your task? Do you need to cut multiple logs? Then the band saw is the best bet. If you have a small workload or you just want to make light cuts on a material, the jigsaw would be your best bet.

Another factor with the task is how much you would be using the power saw. If you want a power saw for daily use, you can get the band saw. Band saws last longer than jigsaws and band saws can withstand daily use for a long while as long as you follow the cleaning routine.

The size of your workspace or available space to put a power saw also matters. Band saws usually require a large workspace due to the size of the power saw. Jigsaws on the other hand are handheld tools which means you can use them anywhere regardless of the space.

So there you have it, the differences between jigsaw vs bandsaw. If you have any questions or comments about the topic, kindly leave them below and I’ll attend to them as soon as possible. Have a nice day.