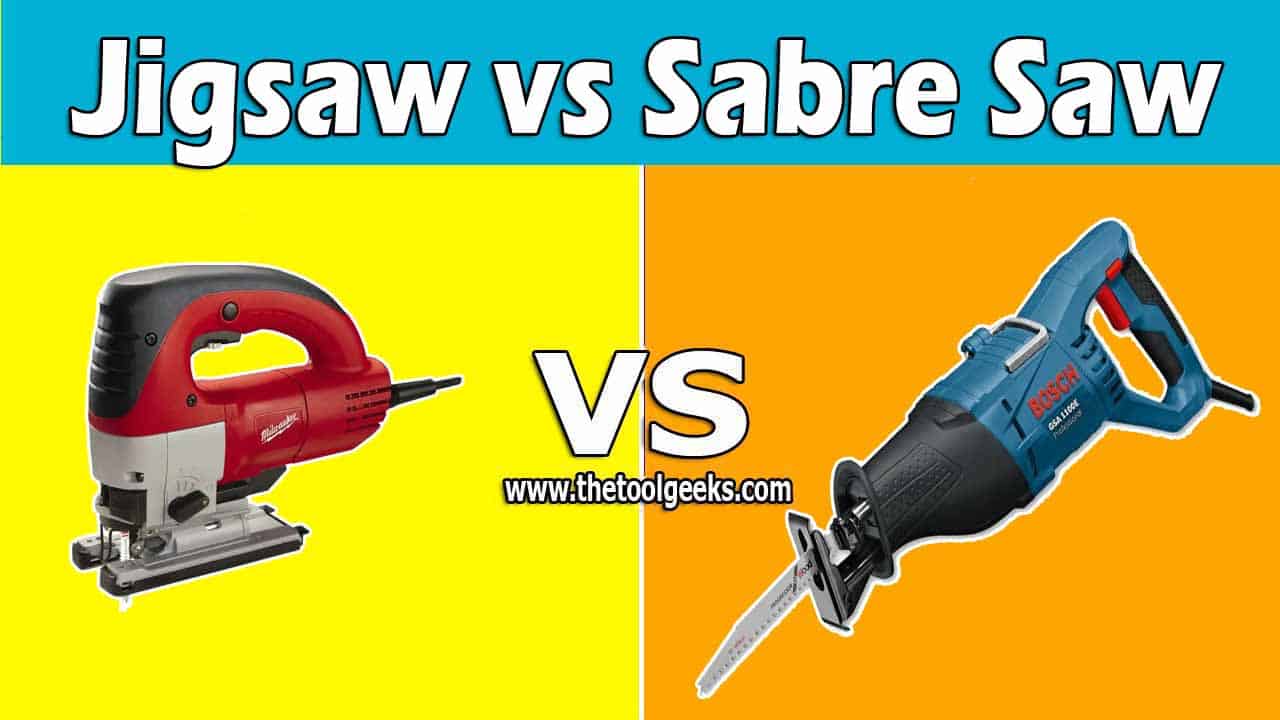 Every profession and field has its gadgets and equipment used for executing tasks and projects. When it comes to woodworking or carpentry, there are tons of power saws used for cutting and shaping wood. Sometimes, these power saws are often similar in terms of build, design, and or function. So it’s very common to see people refer to a power saw using the wrong name.

Two such saws with similar functions are the jigsaw and the sabre saw. At first glance, there appears to be no visible difference between both saws asides from their distinct design. They are both handheld saws and they offer the same cutting action. This is why hundreds of professional carpenters and DIYers refer to the sabre saw as a jigsaw and vice versa.

However, if you want to buy one of these power saws, it’s very important to know the differences that exist between jigsaw vs sabre saw as well as where both stand when compared to each other. So how do you know the differences? Well, that’s what this post is going to examine.

This post is going to introduce you to and explain everything you need to know about both the jigsaw and the sabre saw as well as expert tips to help you figure out which will fit your task best. So let’s get on with it.

What Is a Jigsaw and What Is It Used for?

Jigsaws are one of the most common power saws found in virtually every woodworking workshop. The saw is known for its versatility and accuracy.

Added to this is the fact that jigsaws are lightweight as most of the brands out there weigh less than 6 pounds. This makes them very handy power saws.

Jigsaws are usually regarded as a “beginners power saw” and this is because the power saw is very easy to use. The lightweight and position of the blade reduce the risk of injuries while using the power saw and it’s also easier to make cuts and curves with the jigsaw than with most other saws.

The jigsaw uses a thin and short blade to make cuts. The blade of the jigsaw is positioned below the saw and it protrudes through a small opening.

The jigsaw is one of the many power saws that use a reciprocating motion to make cuts. This means that the blade of the saw moves in a back and forth motion to make the cuts on wood.

What Is a Sabre Saw and What Is It Used for?

Sabre saws are also handheld saws. Sabre saws are often called reciprocating saws meaning the blade moves in a back and forth motion just like that of a jigsaw.

The Sabre saw uses a thin blade attached to the saw to make cuts. Sabre saws have different types of blades.

Each with its distinct length, number of teeth, and thickness. Sabre saw blades are suited to different tasks. The longer and thicker the blade, the more the power. 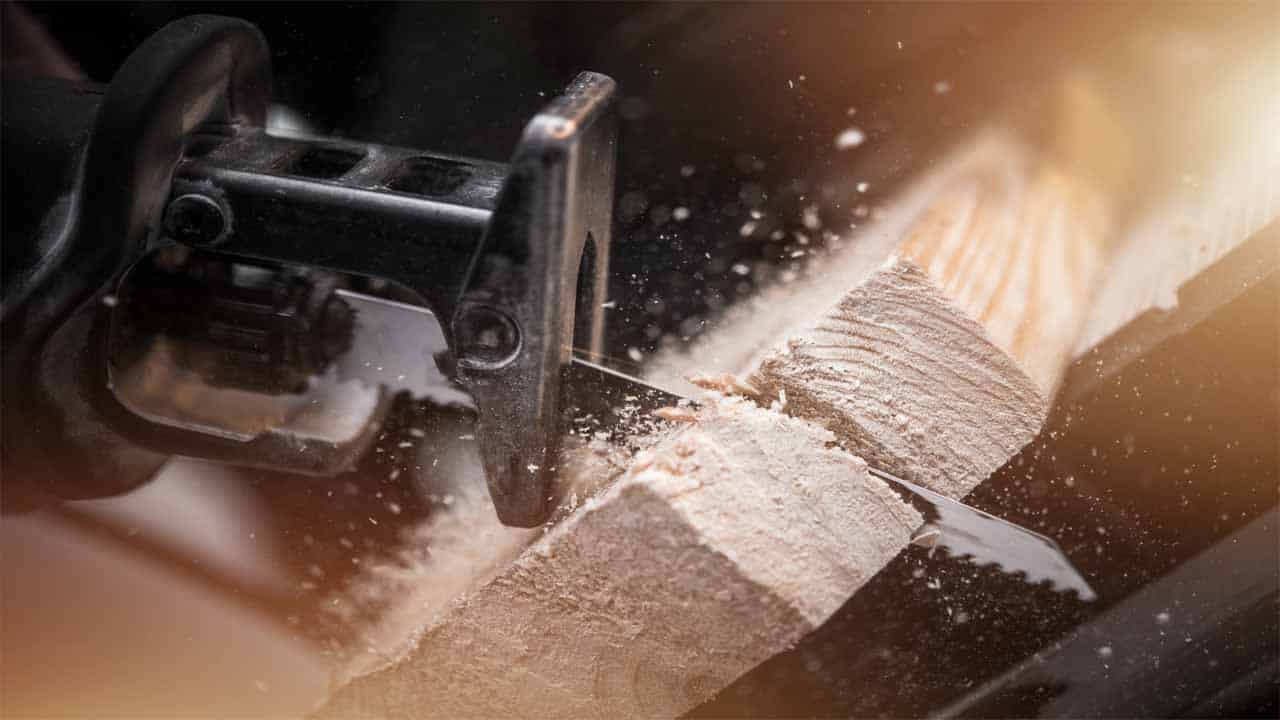 Sabre saws are popular in the hands of construction workers and carpenters that work on construction or demolition sites.

The power of the saw means it is capable of cutting thick materials. A major advantage of the Sabre saw is that the structure of the blade makes it possible for the saw to get in tight corners and angles. So if you have a thick board or pole in a tight corner that you want to cut, a Sabre saw will be the best bet.

Sabre saws are designed to be used either with both hands or with one hand. The saw doesn’t need a table to work. The saw is usually pushed against the stock or material to be cut and the blade makes the cuts.

Sabre saws are often confused with jigsaws because both saws use a similar blade and are used for similar tasks.

Both the jigsaw and the Sabre saw are amazing power tools and both have their advantages and disadvantages.

While both saws are very much similar in terms of cutting action and structure, they also have a few different features.

Both the jigsaw and the sabre saw use a reciprocating motion to make cuts. This means the blade of the saw moves back and forth while cutting the wooden stock. The difference comes in how they are positioned to make the cuts.

Sabre saws on the other hand do not need a table. Using a table with a sabre saw will even make the saw difficult to use. Sabre saws are usually pushed against a surface to make cuts.

The shoe of the saw is pressed against a flat surface like a wall while the blade moves back and forth to make cuts. So while jigsaws are tabletop saws, Sabre saws are not.

In terms of the size and weight, both saws are to a very large extent similar but there is usually a slight distinction. For the size, jigsaws are usually bigger than sabre saws. A jigsaw looks like a slightly bigger pressing iron while sabre saws are more in the shape of a small saw (the one used by hand).

The slight size advantage that the jigsaw has over the sabre saw doesn’t translate to weight advantage. Sabre saws though usually smaller than jigsaws can weigh more than jigsaws. Some jigsaws weigh as low as 3 pounds.

Most Sabre saws weigh between 4 pounds and 10 pounds. The average weight of a Sabre saw is about 5 pounds.

Though there is that slight difference in weight and size, both saws are still very handy and are considered lightweight so when you want to buy one of the two, the size and weight can be the last feature you consider. Let’s check out a feature that is usually the first to consider when buying a new power saw.

The Power and Speed

When you want to buy a new power saw, two features to always consider before any other are the power and speed of the saw. The power of the saw determines the type of task the saw can take on and the speed determines how quickly you can cut through the stock.

Both features are usually considered differently but with the jigsaw and Sabre saw, we can take both together because the power and the speed of the saw are determined by the motor which is the life of the saw.

In terms of power, Sabre saws rank higher. As small as Sabre saws are, they are incredibly powerful power saws. If there is any saw that shouldn’t be judged by its look, it’s the Sabre saw. Sabre saws are usually packed with enough power to cut through thick wooden boards and logs.

At best, the amperage of the motor in a jigsaw can be about 7 amps. Sabre saws on the other hand are usually packed with stronger motors. The motor in a Sabre saw can be well over 10 amps. The power of the Sabre saw is why it is mostly used for cutting thick stock and for tearing down walls. Jigsaws aren’t as powerful as Sabre saws.

Jigsaws at best will reach a speed of about 3000RPM. Though Sabre saws are slightly faster, you should know that both saws are fast enough.

Even a 2700RPM jigsaw is fast enough to make the needed cuts and curves. Both saws also have a variable speed trigger meaning you can increase the speed of the saw by putting more pressure on the trigger button.

Versatility refers to the ability of a saw to take on different types of tasks effectively. In terms of versatility, jigsaws are way more versatile than Sabre saws. Jigsaws can be used to make straight cuts, curved cuts, and even 45-degree bevel cuts on wood. The position and thin nature of the jigsaw blade make it capable of making intricate cuts with ease.

Asides from the regular straight and square-cut that most saws can make, jigsaws can cut shapes, figures, and make designs on wood. If you want to make a small piece of furniture, cut baseboard, make arts and crafts, a jigsaw is your best bet. The saw is so versatile that it can take on virtually any cutting task that requires moderate power.

Sabre saws on the other hand aren’t versatile. The power saw is known for its power and not its versatility. Sabre saws are largely restricted to cutting large stock and for rough cutting. You can’t make angles cuts or cut shapes with a Sabre saw even if you are a professional. If you somehow succeed at it, the result will be very poor.

In terms of cutting accuracy, jigsaws are more accurate than Sabre saws. For a power saw to be used to make jigsaw puzzle and to cut shapes and designs, then you know the power saw is very accurate with its cuts.

Jigsaws are popular for their accuracy. If you are making a piece of furniture or you are working on a project that requires you to join wood together, a jigsaw is your best bet.

Sabre saws on the other hand are not accurate. The saw is more suited for rough work than for precision cutting. Sabre saws also experience a bit of wobble with the blade and there is always kick back too.

This means you can’t achieve a straight or accurate cut with a sabre saw. However, if you want to tear down something or make a quick and rough cut, then the sabre saw will work fine.

Should You Get the Jigsaw or The Sabre Saw?

If you want a power saw for rough cutting or to cut materials quickly without worrying about the accuracy, then you should get a sabre saw.

With the saw’s power and speed, you will complete your task in no time. However, if you need a saw for its accuracy or you are working on a task that requires intricate cuts, then you should get a jigsaw. The saw’s accuracy and ability to make difficult cuts will help with the task.

If you want a pocket-friendly option, you should go for the jigsaw. However, if you are looking to get a sabre saw and you don’t have enough to buy a brand new one, you can go for a used sabre saw or a second-hand sabre saw. They are usually less costly than the brand new ones.

Consider How Frequently You Would Use the Saw

So there you have it. Here’s everything you need to know about jigsaw vs sabre saw. If you have any questions then please leave a comment down below and I will get back to you as fast as possible.