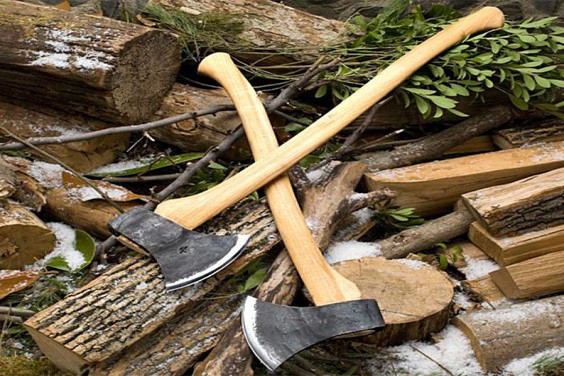 If you read my blog then you know that I have mentioned a lot of times that there are a lot of different types of axes.  They may look the same, but their purpose and some small detailed are different.

It is important to know the difference, especially if you are shopping for an ax. You want to avoid buying the wrong ax for the right job, it will only consume you a lot more energy and time.

The Maul, Splitting ax and Felling ax are NOT the same. I have seen a lot of websites giving answers about this topic, but most of them are wrong or partial right.  That’s why on this post we will dig down and explain to you the differences between these three axes and also explain how they work and what’s their purpose.

If you are in a hurry, we will shortly explain the differences between these three tools. But I highly recommend you to read the full post so you can know each of these tools’ purpose and how they work.

These are the differences between these three tools, if you want to know more about the tools and their purpose then make sure to read the whole post since we will be covering each of these tools and explaining their purpose.

A lot of times the splitting maul is also called hamaxe or sledge ax. The main reason for this is because of its design. The mauls look like a sledgehammer at one side and as an ax the other side.

Actually, by some definitions, the splitting maul is technically a hammer and not an ax.

The way that mauls split wood is different from the other two tools. While the felling axes are designed to cut through the wood against the grip, the mauls use a different way and that is to split the wood apart using leverage.

If you compare the splitting ax and the maul, then except for a smaller body, you will also see some small different detailed, for example, the head shape. The splitting ax doesn’t have a hammer-shaped head and the handle is shorter.

So, which one should you use and why?

Since they do the same job and look the same then choosing which one to use can be a hard decision. But it all depends on these things.

But it also depends on the project you will be working too. Say you have to split strong wood such as hickory.  Hickory is strong wood and it will take a lot more to cut through it.  So, you need to use the maul because its a heavier and stronger tool and can help you split the wood easier.

We mentioned it earlier, that felling axes have a different purpose and they don’t have the same design as the splitting axes and splitting mauls. The felling axes are used to chop down trees, cutting off tree branches, etc.  All these tasks require you to cut across the grain of the wood, and that’s why you need a felling ax.

To make it easier for you to understand, felling axes are used for that type of work that created woodchips as a product. The process goes like this –  you cut down a tree, you cut off large branches, and then you cut the logs in half [ across the grain ].

To cut the trees you want a sharp and flat blade and that’s the things that a felling ax has. Moreover, while cutting down trees you need to make different swings ( e.g up-down, side-to-side, etc ). Having a lightweight and sharp blade makes this process much easier.

Now that you know the difference between these three tools you can buy the one you actually need.  These tools can still be used to complete the other job but to complete a woodworking project faster and better then its recommended to buy the right ax for the right task.