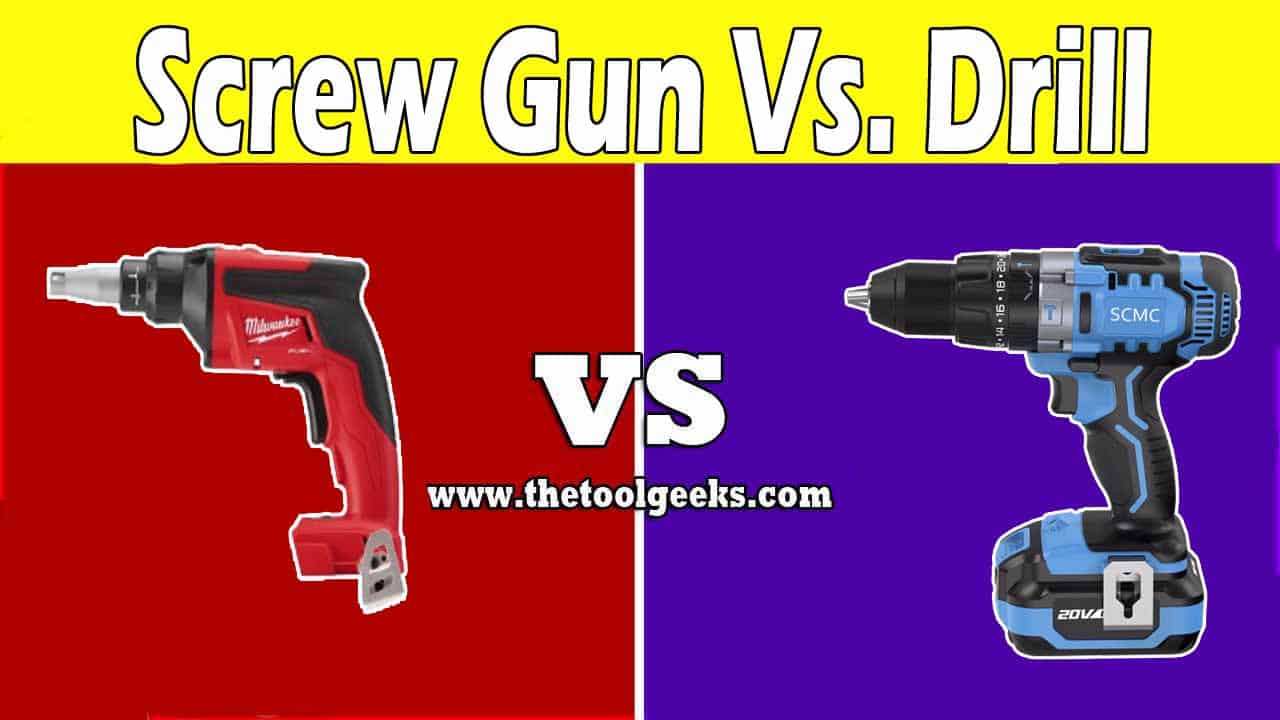 Truly, they might be similar in some aspects but at the same time, their functions and purpose of use are very different.

Foremost, the difference between both tools is that screw guns can only be used for clamping screws, while drills are just used to hold drill bits and other components while screwing. Screw guns cannot drill holes and are not designed for such but drills can.

In this article, we shall be comparing a screw gun vs drill based on a couple of the differences between them. In addition, we shall be discussing the similarities between them, their features, advantages and disadvantages, and which to buy for a particular purpose.

What is a Drill? 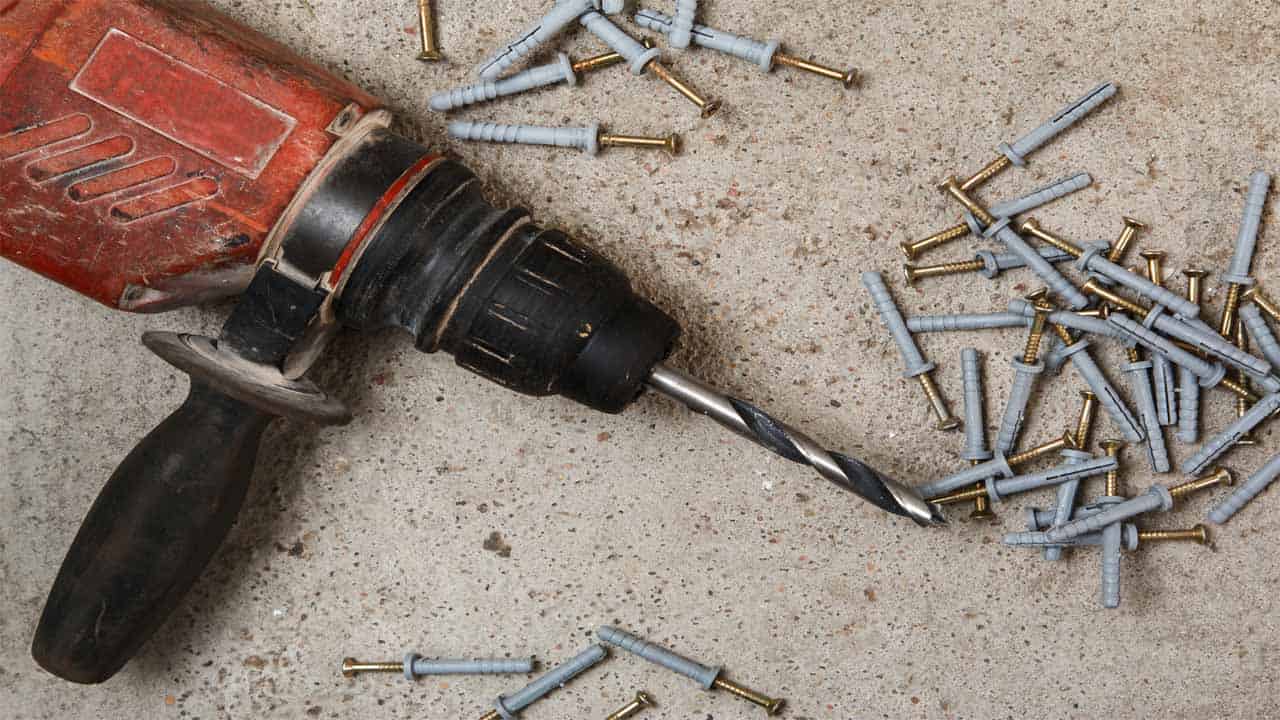 It comes equipped with a reciprocating hammer that is used while making holes and the interchangeable bits that with it are responsible for its versatility. Drills are an important tool for trade professionals and people who love to do it their selves.

There are two main types of drill and which to use depend on the type of task you want to execute;

Drivers: Drills are used for drilling holes into materials like plastics, wood, etc. Drivers are often used for light and simple works.

Hammer drill: They perform the same function as the drivers, but also, they have a hammer used to push the drill bits in. It is used for hard works, drilling into concrete, digging into the ground, rocks, stones, and so on.

What is a Screw Gun?

If you have ever used an instrument that looks like a gun to drive in screws on surfaces- mostly walls and other surfaces, then you must have encountered a screw gun. It is similar to a power drill only that its main function is to drive in screws. 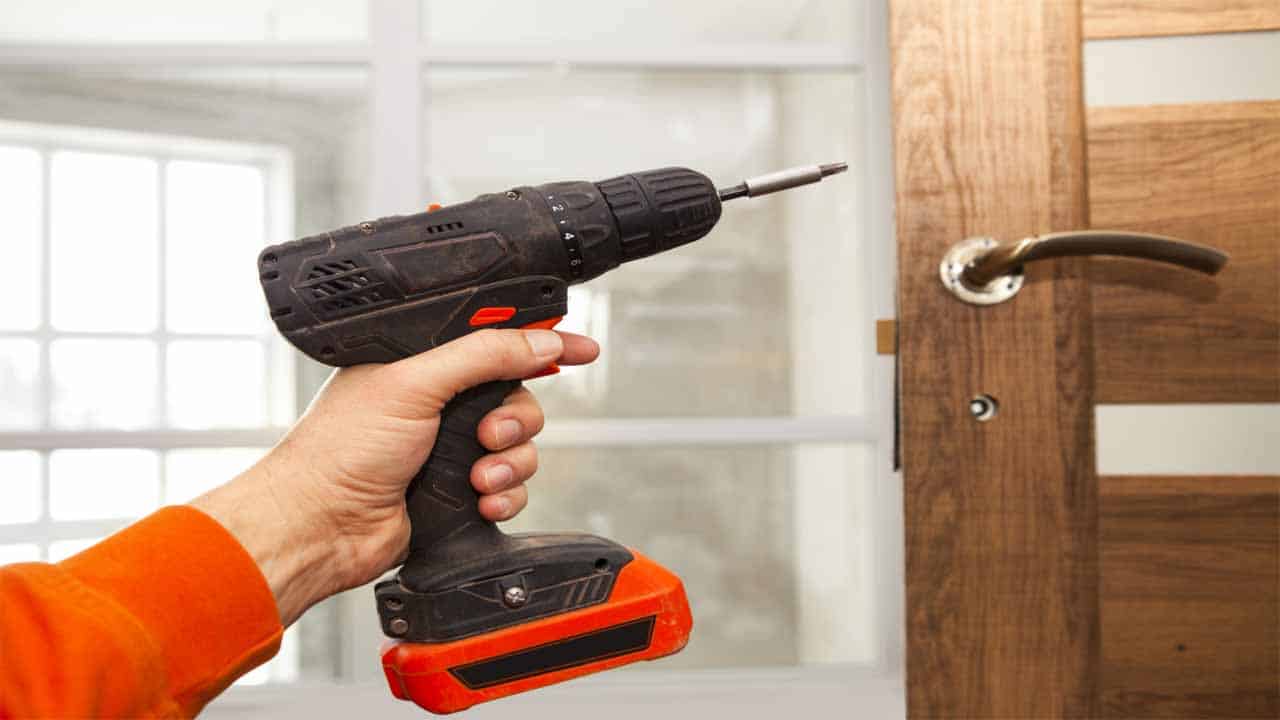 A screw gun looks like a drill but instead of a chuck, it has a nose. The nose secures an exchangeable shank bit with a size of 0.25 inches. To use this tool effectively, the user needs to apply force on the clutch and drive in the screws.

Truly, the screw gun is a professional instrument but it has limited uses, which is one of the reasons most people prefer the drill to it.

It is only used for driving screws and allows users to set it to their preferred depth. The setting is one way to prevent the top of the screw from piercing and damaging the drywall. Most users think it is not of much importance but it is.

Latest advancements like the screw reel, have made the screw gun more efficient in its use meaning that users no longer have to have the usual break to load a screw manually.

Now that you know what both tools are, it is important to compare both. Below are some of the differences between both tools.

A screw gun is used for fixing and carrying out other easy and simple tasks. It can fix screws on hundreds of drywalls within few minutes without breakdown. However, the drill is like a jack-of-all-trades- a multi-tool. It performs multi tasks and can be used to execute hard and rugged works.

After the series of technological advancement that has influenced all facet of occupation and the tools used, the drills and screw gun are of no exception.

Unfortunately, when it comes to these two tools only the screw gun meets up with the requirement of an automated tool.

Its screws are set in strips and fed automatically into the gun, unlike the drill whose screws have to be set manually.

Both tools can be convenient to use depending on the situation, but if you love fixing things around the home yourself, and you need a tool you can always rely on then the drill is your best pick. However, this is not the case with a professional or expert at the construction site.

For experts, a screw gun is the most suitable tool for us because it can complete large tasks in few seconds because some of its parts are automated.

This factor should not be skipped when talking about power tools. How long can they run? How fast can they get the job completed and so on?

Since the drill is so popular, assuming it has more importance of use than the screw gun would not be an exaggeration. This is because the drill is a handy tool, always readily available, versatile, multifunctional, and easy to use. Whereas, the screw gun has limited usage.

A screw gun can only drive in screws and you can select the exact hole depth you want- making it a precise tool while the drill can make and dig holes but you cannot choose the exact depth you want. This is so because the chuck on a drill is designed to take different drill bits.

Another reason the drill is not considered a precise tool is that it can be converted into a screw gun and it can drive screws.

Comparing both tools based on some of their functions, the drill can be converted to fix drywall and act in place of a screwdriver. It can also serve as a hammer drill for fixing strong, hard materials. Lastly, its auxiliary handle helps the user have total control over the tool and it can make holes of your preferred size.

On the other hand, the screw gun has the perfect depth accuracy that could fit any screw. It does not run on manual reload and like the drill, it also lets users experience total control during use. Also, the screw gun works faster than the drill.

In terms of features, the drill also beats the screw gun due to the following reasons. Foremost, the drill uses a flexible speed and exchangeable drill bits. Besides, it also has a self-locking chuck for protection and an auxiliary handle.

The screw gun has a nose, clutch, and depth setting. It runs on auto-feed, which means you always have to be at alert while using it.

Now that you have a peek into what both tools are, their uses, their pros, and cons and how to use both tools, it is high time you decided which of the tools to pick either for your construction work or if you intend to do-it-yourself.

To help you make the best pick, we shall take you through the process of making the best pick between a screw gun and a drill. This will be done based on a couple of factors.

The versatility of both tools has to do with each being multi-functional. The tool, which users can easily use to execute more than one or two tasks, is referred to as a versatile tool. And with no iota of doubt, the screw gun has limited uses. It is not as versatile as the drill.

The drill is versatile such that it can be used to perform more than one task. Even more than three tasks. Its versatility depends on the task at hand. This is one of the reasons the drill is more popular and common than the screw gun. Overall, a drill can be converted into a screw gun and paired with simple and detachable equipment.

There is no gainsaying that the drill is more popular than the screw gun. Just do a random survey, ask people around. Beginners, amateurs, professionals, and DIYers, you would observe that only a few of them would have heard of the screw gun not to talk of using it to execute one or two of their projects.

In fact, the drill is so popular that it is one of the most popular tools in the world.

Should You Buy a Screw Gun or a Drill?

Having doubts about which of these two tools to buy. Maybe you should consider the following factors.

If you have the luxury of time and not in a rush to execute your project, then you can make do with the drill as it does not work faster because it uses a manual reload. However, if you are on a tight deadline and wish to complete your task sooner, then you should consider going for the screw gun because it is faster than the drill.

Another factor that needs to be considered while making a pick is your budget- how much you can afford. If you are on a low budget, the drill is your best pick because it is cheap. On the other hand, if you do not mind the price, then you can opt for the screw gun.

Type or Nature of Work

The nature of your work is also a great pointer as to which of the two tools would be suitable for you. You would not love to pay the price on a particular tool and later find out that it cannot satisfy you, that is why you need to watch the materials you would be working on before making a purchase.

Suppose you would be working on drywall, wooden decking, or floorboard, then the screw gun is recommended for you. Overall, it is advisable to settle for a drill since it can be converted into a screw gun only that it cannot execute your task very fast.

In this article, we have examined what a drill and screw gun is and what they are used for. The differences between both tools and what made each superior to another were carefully highlighted and explained.

In addition, we have gathered some important factors for you to consider should you in doubt when making a purchase and lastly, we hope this comparison guide will be of great help and assistance to you and aid your selection process. One important thing worthy of knowing is that if you have the money, then you can settle for both tools.