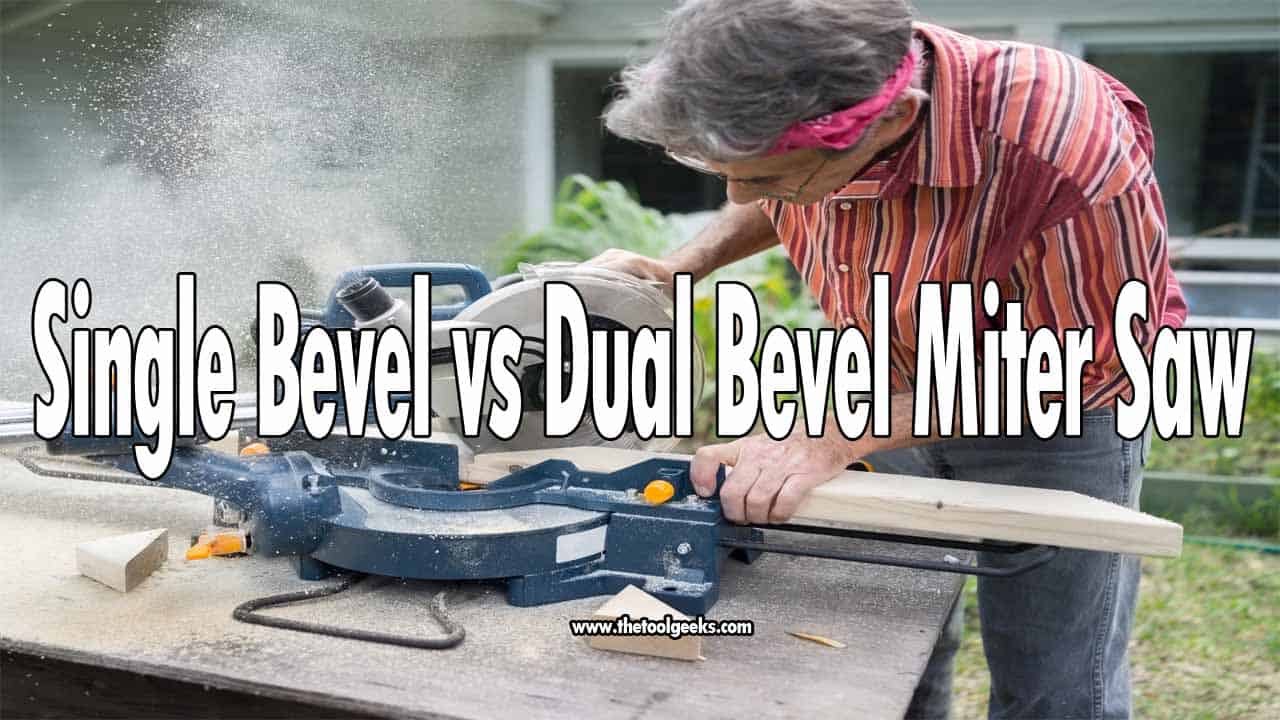 There are compound miter saws, sliding miter saws, and the likes. However, the most important question to ask yourself is: “Are you going to purchase a single bevel vs dual bevel miter saw?”

The answer to this question will determine the overall time it would take you to complete your cuts and how easy it will be to make the cuts. So, what is the difference between both types of miter saws?

This post will introduce you to and explain all you need to know about the single bevel miter saw and the dual bevel miter saw as well as the strengths and weaknesses of each miter saw to the other. So let’s get on with it.

What Is a Bevel Cut?

Before discussing the difference between the single and double bevel cuts, it’s important to know what a “bevel cut” is. A bevel cut is a cut made through the thickness of a board or material.

It is made by tilting the head of the miter saw to either the left or the right. It is very different from a miter cut which is made by simply tilting the angle of the blade to the fence.

For a miter cut, you will move the saw’s table to a certain degree but for a bevel cut, you will tilt the angle of the blade either to the right or the left. Bevel cuts are used for doorstops and for joining pieces of wood together so they fit perfectly.

What Is a Single Bevel Miter Saw and What Is It Used for?

This will be difficult if it is a heavy piece of wood. For heavy wooden materials or sheets, the whole miter saw is usually turned around to the other side to make bevel cuts on each end of the material to be cut.

The time it takes to move the miter saw and reposition the material that is being worked on will result in a longer time frame to complete your task. This is why many professional carpenters prefer to go for the dual bevel miter saw. The single bevel saws are used for making single angled cuts, crosscuts, miter cuts, and so on.

What Is a Dual Bevel Miter Saw and What Is It Used for?

This means you can make bevel cuts on any side. This makes your work easier and quicker regardless of the size of the material you are working on or the number of bevel cuts you need to make.

The double bevel miter cut is a great fix for different types of cuts. Asides from the usual miter, cross, and compound cut that all miter saws can make, the dual bevel miter saw can make bevel cuts on the opposing sides of the same material.

When making furniture that deals with a lot of precision, joinery, and angled-cuts, a dual bevel miter saw is the best bet. It is popular among woodworkers that deal with a lot of crown molding and trims.

Note: If you don’t have a miter saw, then you can check here our cordless miter saw review. 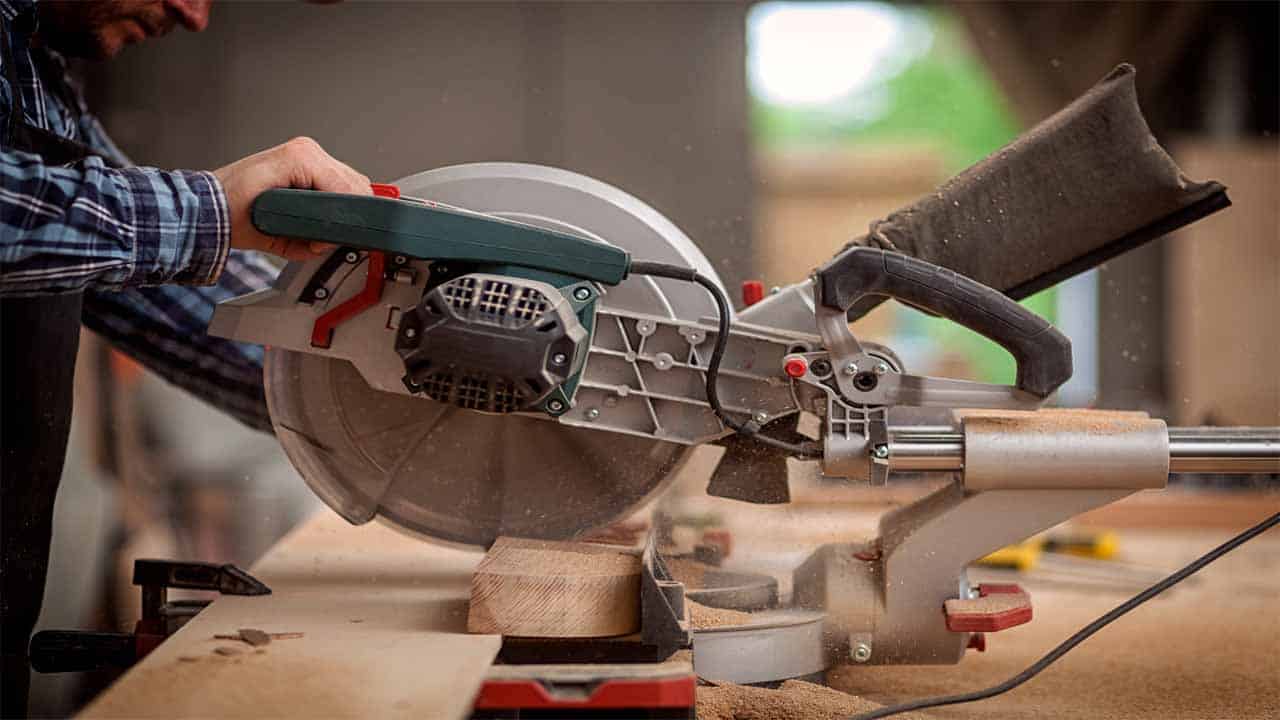 When it comes to the speed of the blade, both saws have the same speed. The blade of a miter saw spins at about 3000 RPM.

However, the rate at which you get tasks done is a different factor. With a dual bevel miter saw, you can complete tasks quickly and easily without having to take a break to change the position of the wood or that of the miter saw itself.

With the single bevel miter saw, you will still be able to complete tasks quickly but when you have a task that requires a bevel cut on both ends of a log, plank, or board, you will have to flip the material or lift the miter saw to change its position. This will be time-consuming especially if you have a large-scale task on your hand.

The size of the miter saw will play a significant role if you are using a single bevel miter saw for multiple bevel cuts. This is because you will need to lift the miter saw occasionally so you can make the required bevel cuts on the material.

Also, if your miter saw is one that you need to carry from your workplace to your home, then the weight will come into play.

The Level of Accuracy

That will be an even bigger problem if you are building crown molding, window trims, or baseboards. Of course, this problem wouldn’t exist with a dual bevel miter saw. You can just tilt the head of the saw in any direction without needing to reposition the miter saw or the material to be cut.

However, when using single bevel saws to make bevel cuts on both ends of the material, there is an increased risk of potential accidents to the user.

This is because miter saws aren’t particularly designed to be carried or flipped regularly. They are tabletop saws which mean they are to be placed on a firm table or a miter saw stand to use them.

While lifting the miter saw, you can trip and the saw can drop from your hands. Not to mention the risk of getting cut or the risk of electrocution if the single bevel miter saw is a corded model.

The Price or Cost

The price variation will also play a huge role in determining which of the miter saws you buy. Though the dual bevel is costlier than the single bevel, you can’t say it’s not worth that price. So getting a dual bevel miter saw can be a good long term investment for you.

Should You Purchase a Single Bevel or Dual Bevel Miter Saw?

Any one of the miter saws would be a great power tool to have in your workshop. However, the final decision to pick just one rests on a few factors.

On the other hand, if you are a professional carpenter or woodworker, then a dual bevel miter saw would be your best bet. This is because you are very likely to have large-scale tasks on your hands that will require multiple bevels and miter cuts. Using a single bevel miter saw will result in so much time-wasting for a professional.

So there you have it. If you have any questions, comments, or need a recommendation on single bevel miter saw vs double bevel, you can leave a comment below and I’ll reply to it as soon as possible. Have a nice day.