A band saw and a scroll saw look almost the same, but does that mean they are the same tool? No, here’s the difference between a band saw vs scroll saw:

The main difference between a band saw and a scroll saw is the purpose. The scroll saw is used for detail work to give the material a final touch, while the bandsaw is mostly used to cut thick wood.

But, there’s more to this. These two tools use different blades and have different features. Let’s check it out.

What’s the Difference Between a Band Saw and a Scroll Saw?

The first difference you may notice between these two is the blade. The Scroll Saw blade is thin and short. On the other hand, band saws blades and bigger and flexible

Scroll Saws are used more for small projects, they are perfect for detail work and you can use them for inside cuts too, mostly they are used to design wood. But since their work table is not that big and their blade is smaller that means that they can only be used with small objects.

Band saws are more powerful and can easily handle big projects. With the right blades, they can even cut metal. But, they are mostly used for woodworking and cutting big wood objects.

So, the difference between these two is the purpose. Scroll saws are used for designing and detail work while band saws are used to cut big wood and sometimes metal too.

Note: If you don’t already have a band saw then I recommend you to check our blog post “Best Band Saws ” which will help you choose the best one for you

What is a Scroll Saw? 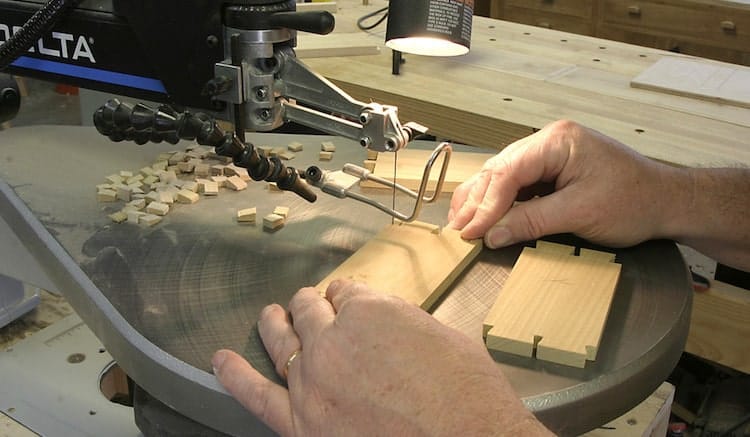 A scroll saw is a saw that has small blades. The blades are no more than 45 inches in width. The blades move up and down at a high speed.

They use electricity and allow you to control the speed that the blades move by just pressing the pedals, which can be very challenging at the beginning, but after a while, you will be able to control it easier.

If you are looking online to buy a scroll saw, you must have seen that most of the manufacturers tell you the “throat” size. The throat size for scroll saws means the distance between the blade and the rear part of the saw.

Depending on the material and the object you are working you may want a longer or shorter throat. To understand this better I’m gonna give you a simple example of how scroll saw throat works and how to choose the right one for you.

Let’s just say that you bought a scroll saw that has a “throat size” of 15 inches. That means that you can use it on materials that are 30 inches across.

Why the double? Because think about it. The blade can just reach the center of the material, then you can turn the material upside down and work with the blade at the other side. So, if your object across size is 40 inches then you should buy a scroll saw with at least 20 inches throat.

But you have to keep in mind that you should always leave a little space. So, if your object is 24 inches across, then make sure to choose a throat size of 13-14 inches. Usually, throat sizes come from  12 inches to 30 inches.

Another thing that you may want to consider before buying a scroll saw is that the blades are only 6 inches long. The blades are not good with thick materials, because they have to move up and down, which means that they can’t cut thicker than 2 inches.

And even that is hard to archive. So, to get the best of the scroll saws is better to use materials that are 1-inch thick.

When it comes to changing blades, you would be surprised at how easy is to change blades on scroll saws. The only thing that is somehow considered hard is to get the tension right. But, using a tensioning knob can make things easier.

As we mentioned earlier, blades are the first thing you may notice when it comes to differences between these two tools. Actually, they are the biggest difference. And scroll saws allowing you to do inside cuts can be another thing that sets these two machines apart.

We talked a little about scroll saws, but now what’s a band saw? As we said before, scroll and band saws look almost the same. That means the band saw has a working table and blades too.

The band saw is more powerful than a scroll saw. Using the right blades you can even cut metal, but they are mostly used for woodworking.

The bandsaw has an open front and back, which means you can cut long wood materials. So, as long as you can fit something on the table then the band saw will probably cut it.

It’s always good to leave a little space between the blade and the object, but you get the idea. Band saws are perfect for contractors who don’t have a big workplace, they don’t take a lot of space and they are fast and powerful.

Band saws blades are circular and flexible, they are easily folded and unfolded. Most of the models use a two-wheel system one that is above the table and the one below, there are some models that use a 4-wheel system.

When to Use Band Saw Vs Scroll Saw

When it comes to buying one or another, then you have to know what tasks you are gonna use them and then you can decide. The truth is that these two do look quite the same, but they are used for different tasks.

When Should You Use a Scroll Saw? 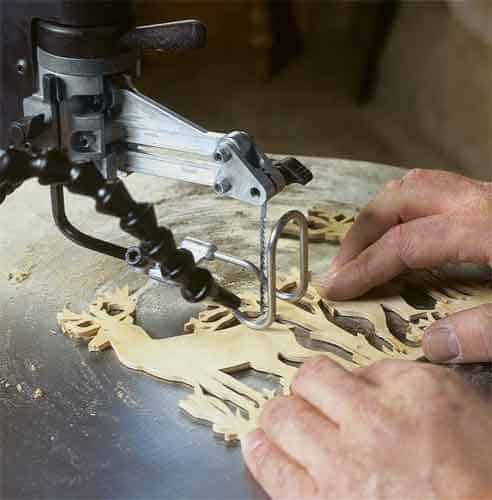 As we said before, scroll saws do not have the same power as band saws do. That automatically means that you should only use this machine for small tasks.

If you have to work with thin and small materials then you definitely should go for scroll saws. These machines do a good job when it comes to creating a clean and intricate cut.

Some of the things you can do with scroll saws are :

If you have to work with long and thick materials then a scroll saw isn’t the right tool to help you cut them. Sure, you can upgrade the scroll saws blades but even that doesn’t help a lot, it doesn’t come near the power that band saws have.

Basically, they are made just for small tasks, so if you have to cut a wood object in half or make a big cut then you should look for other choices, scroll saws can’t handle that. That’s why it’s always good to know the materials and projects you are gonna do before buying a saw

When Should You Use a Band Saw? 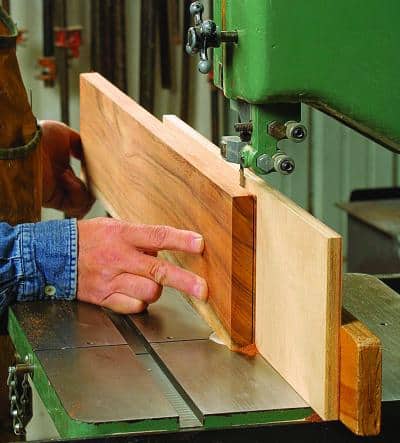 If speed, accuracy, and power are your concern then band saw is your go-to. They can cut almost every material, thick or thin it doesn’t matter, as long as it fits on the table then the band saw will be able to cut through it.

While scroll saws can’t make a straight cut, band saws are known for aggressive & fast straight cuts. And this is all thanks to the blades that always go in the same direction.

Except for straight cuts, band saws can also be used for angled cuts. If you have a high-quality band saw then you can tilt the table to make cuts up to 45 degrees.

When it comes to band saws, then you just have to be a little creative and you can do almost everything. Although there are a lot of things & projects that you can complete using this machine, here are the things I use a band saw for:

With a scroll saw you would easily make a hole in the middle and make these letters, but you can’t do that. And even if you found a workaround to do it, the cut won’t look clean and quality. and in most cases, it will make the wood weaker.

If you compare the price of these two, then scroll saws are cheaper. They cost less and they are mostly used by DIYers and beginners. On the other hand, band saws cost a lot more money.

There are band saws that cost up to 1,000$. A reason for this is because they are more commercial and are used by contractors or professionals.

Learn More — What’s The Difference Between Jigsaw and Bandsaw?

Since they look quite the same and their name may sound the same, one can get confused and think they are the same tool. But, in fact, they are used for completely different tasks.