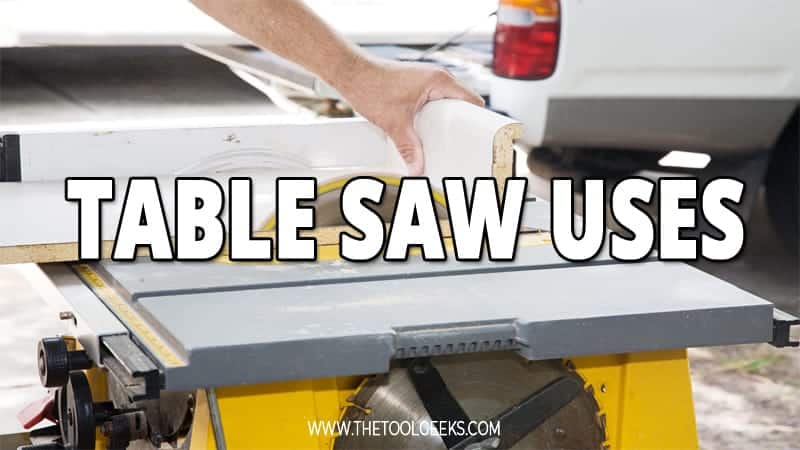 In the world of tabletop saws, the table saw uses. Table saws are large power saws found in virtually every woodworking shop and every construction site.

How Does a Table Saw Work?

The blade is powered by a motor that can be as powerful as 15amps. The motor works to spin the blade of the table saw. The table saw uses a thick carbide circular blade with teeth to make the needed cuts on the material.

The cut is made as the blade spins and goes through the stock. The blade of the table saw can spin as fast as 4500RPM (revolutions per minute) and it is also as powerful as cutting solid steel. The material to be cut is usually fed into the path of the blade. This is because the table saw blades are stationary. They can’t be moved.

What Are Table Saws Used for?

Table saws like all other saws are used for making cuts. But the table saw does more than just slice materials. Let’s check out some of the best uses of a table saw.

A straight cut is a cut made across a material or board. There is hardly any other power saw that can make a straight cut as good as a table saw.

Table saws excel in making straight cuts because of the stationary feature of the blade. A straight cut is just as the name connotes.

This is a cut made through the material in a straight line. To make straight cuts on wood, the table saw is usually attached with a thin blade because thinner blades have less kerf so the cut will be neat and straight. 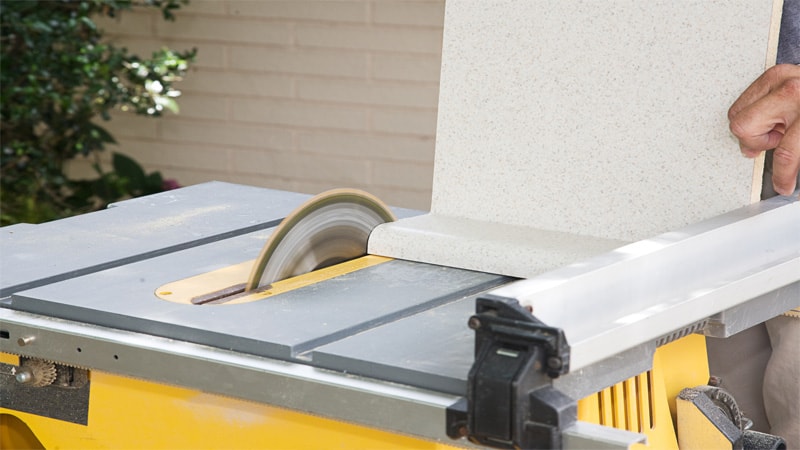 The blade and speed of the table saw also make it possible to make cross cuts on different materials.

To rip boards or wood, table saws have a different blade and a different one for making crosscuts too. As long as the right blade is used, you can make a neat cross cut or rip cut.

The miter gauge, the fence, and the table also help to make these cuts as straight and accurate as possible.

Table saws usually have a wheel underneath the tabletop of the saw. This wheel can be used to change the direction and angle of the blade.

Bevel cuts are cuts that are made at a certain angle. Such cuts usually have a slope. Bevel cuts are needed when working with furniture, or any project that has corners and edges.

Not every power saw can make bevel cuts. Only a few power saws can and the table saw is one of those select few. With a table saw, you can get a very accurate bevel cut for angles and corners.

It takes a good deal of power from the power saw to resaw wood. The wooden boards, logs, and timber you get for your task don’t usually come ready-made.

You will need to chop them into smaller pieces. This process is called resawing. Resawing requires power because you will be cutting clean through a wooden stock.

Table saws have enough power for this. That is why you will find table saws in sawmills and construction sites where there is usually a lot of resawing. The thick blade of the table saw is another reason the table saw excels at resawing.

Table saws can be used to make dado cuts. Most other power saws can’t make dado cuts because these cuts are difficult and they also require skill and experience.

Dado cuts are needed when building shelves, cabinets, drawers, and the likes. Dado cuts are used to hold door panels and drawer bottoms. If a dado cut is what you need, the table saw is your best bet.

The table saw has both of these qualities. It is powerful and accurate enough to cut metal like steel, aluminum, and the likes. Table saws can cut most of the steel used in construction work and building.

Table saws can also be used to cut the wood used in making frames ranging from window frames to door frames. Making frames means you will need to do a lot of joineries.

You will also need to make different angle cuts to join the wood together. A table saw is capable of making such cuts. The table saw can cut the wood used for making door frames and window frames with a good deal of accuracy.

Related Read — How To Make a Taper Cut With a Table Saw?

For Cutting Curves and Arcs

Table saws are also capable of cutting curves, arcs, and even edges though it isn’t a task for just anyone. It takes a good deal of skill and experience to cut perfect curves and arcs with a table saw. However, it can be done. 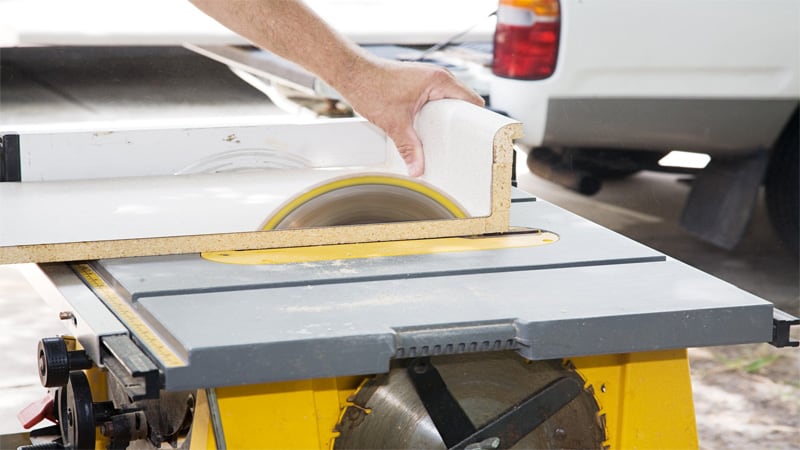 It is similar to the method of making curved cuts on a band saw. The difference is it’s easier to cut curves with a band saw than with a table saw.

Related Read — How To Make Angled Cuts With a Table Saw?

Table saws are also excellent for cutting large wooden stocks. Cutting large and broad wood is usually very daunting. This is because it is difficult to pin the materials down and it is also very difficult to cut them in one go. Most power saws can’t cut large boards like plywood in one go.

You usually need to cut the wood a bit, then flip it to cut the other end. This is usually tedious especially when you are working with heavier and bigger boards. However, with a table saw, you can cut large boards and wooden sheets in one go especially if you have a sliding table. All you need to do is to extend the table of the table saw, place the material to be cut on the table, and slowly feed it into the path of the blade.

One major reason table saws can cut large boards and wooden sheets easily is because of the table. The table provides support so all you have to do is just move the material to be cut slowly into the path of the blade.

Related Read — How To Cut Plywood With a Table Saw?

Table saws can also be used to cut multiple stocks together at once. For instance, if you want to make the same cut on about 2 or 3 wooden logs together. You can do it with a table saw.

You just need to adjust the blade depth or you should increase the height of the blade. As long as the blade is high enough, you can stack the logs or materials together and feed them into the cutting path of the blade.

This is even a better function for people that work with multiple boards and logs. If you want to make the same straight cut on about 3 logs, you can do it all at once with a table saw.

The table saw is a very versatile and powerful power saw. With a table saw, you can do so much and you aren’t limited by the power saw. Just ensure to follow all the instructions guiding the use of the table saw you have.

So there you have it. I hope you found this post useful. If you have any questions or comments about the topic, please leave them below and I’ll attend to them as soon as possible. Have a nice day.