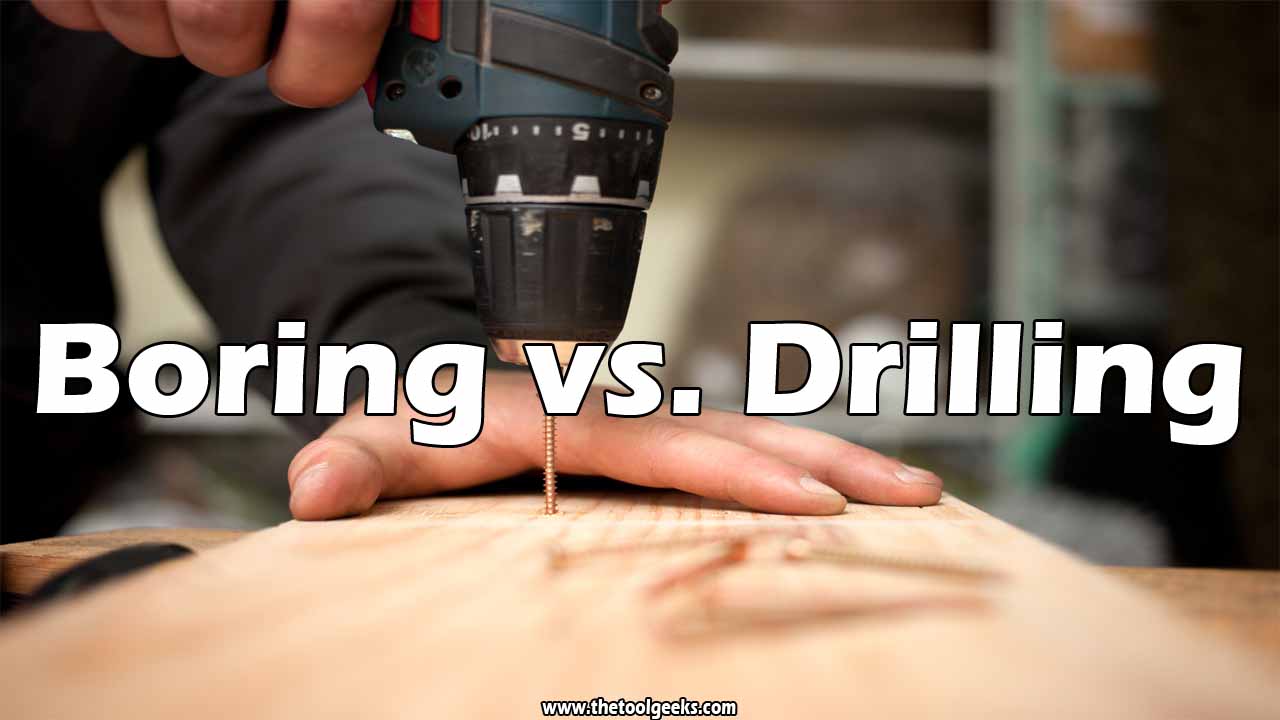 There are many methods of making holes on surfaces and which method to use depends on several factors. Of these many methods, boring vs drilling are often mistaken for each other.

Boring and drilling are two common methods used by manufacturing companies in cutting. While one is used to creating a new hole, the other is basically for modifying an already existing hole. Most people may confuse both processes; this could be because they are both widely common and are both effective ways of cutting and modifying holes.

Both processes follow some subtractive approach, which is the “top-down approach”- as they allow excess materials to be removed from a particular workpiece in form of small Nanoparticles. No doubt, both are cutting processes but there are some differences between them.

For future reference, if you wish to know more about these two processes and the differences between them, then check out this guide as it refutes the misconceptions you might have had about one or each of the processes.

Suppose you already have a hole on a surface, and you wish to enlarge it or increase its size, what comes to your mind? How do you end up doing it? Well, you may not have noticed but the process you used in that situation is called boring.

Boring is simply the method of using a pointed, single cutting tool to increase the size of an existing hole or modify it. In other words, it is a cutting process that involves enlarging a hole, which has been previously drilled or cut.

Lathe machine is usually used in the boring process, but recent development also reveals that a milling machine and a horizontal boring mill can also be used for boring. Though each machine has some features peculiar to them, still, its primary function is to increase the size of an already existing hole.

Also, boring is employed in hole conversion. Hole conversion is a process where a cylindrical hole is converted into a tapered hole.

If you intend to create or cut a new hole on any given surface and you are faced with the challenge of how to go about it, worry not as the best and most preferable option for you is to drill your way through it.

Drilling is the process of cutting through surfaces with the aid of a drill in a circular shape- in form of a hole. It is one of the most efficient ways of cutting holes in any type of surface. Drilling can be done on wood, plastic, glass, and even metals.

The drill is the most important tool used for drilling and a bit is attached to it. The harder and stronger the surface you want to work on, the stronger and harder your drill should also be.

If you are finding it difficult to make a hole on any surface- even walls, then it might probably be because you have not tried using a drill on it. The act of using a drill on surfaces is referred to as Drilling.

Boring vs Drilling (Head to head)

Since you now have a clue as to what boring and drilling is, when each comes to play, and when they are needed, it is high time we carry out a comparative analysis on both cutting processes. In this section, we shall be comparing both cutting processes based on a number of their differences.

The purpose of choosing either of these two methods depends on the state of the hole in question. Has it been already drilled or a new hole is about to be drilled? The primary purpose of drilling is to create a new hole, while that of Boring is to enlarge or modify an already existing one.

There is also a bit of difference when it comes to the initial requirement involved in both processes. While it is not that essential, centering can be done before proper drilling just to increase and improve the drilling accuracy.

However, when it comes to boring, there is no need for centering- since there is already a hole in existence. Casting is an optional step before boring, but it is not often required.

For drilling, the main tool used is the drilling machine( or a drilling press). A drilling machine is an equipment used for making holes and driving fasteners on surfaces. To use a drill machine, it needs to be fitted to a bit- drill or driver, depending on the purpose you want the hole to serve and closely secured by a chuck.

Drills also have a hammer function, which makes fastening and driving easy. There are different types of drills with varying speeds, power, and size. Some types of drills include; corded and cordless drills, manual or hand-operated, and electrically driven drills.  Drills are used in woodworking, metal construction, and other forms of construction, drilling, and large projects.

As for Boring, the tool mainly used is a sharp single-pointed cutting tool that is called a Boring bar. A boring bar is a cutting tool used in metal and woodworking.

Other tools used in the boring process include a lathe machine, a milling machine, and a host of other machine tools. All these tools are usually coupled with the boing bar.

Another notable difference in both styles of cutting is the process employed in both. The drilling process involves using a drill bit to cut a circular section- a hole on surfaces. If the surface involved is a rock, there is another type of drill used for such a surface and it requires a different process.

The process employed in boring includes trial boring, machine check, and so on. And they are all tailored towards increasing the size of an already existing hole using a boring bar or engine cylinder.

Diameter and Length of the Hole

Related Read — How to Drill Into Stucco?

The main challenge faced in drilling is “chip evacuation” and this is the reason it does not give room for deep and continuous plunging.

However, in boring, chip evacuation is not a challenge. Most of the challenges faced in the boring process include wearing of tools, machine error, surface quality, measurement, and adjustment error.

Some other challenges faced in the drilling process include hole deviation, hole cleaning or clearing, formation damage, and so on.

The holes produced in drilling are not usually polished and well-trimmed because typically finished surfaces often between 2-10µ, while that of boring is lesser, within the ranges of 1-5µ. Invariably, this means that the boring process usually leaves holes well-trimmed, polished, and with a better surface.

Besides, the difference between both cutting processes is such that boring can be used to achieve a tapered hole but drilling cannot.

In case you are wondering what material removal rate is, it refers to the quantity of material removed per time in a minute by a cutting process using a drill, lathing machine, or milling machine.

From this article, we have learned that the boring cutting process can be used to enlarge the diameter of a hole, improve the dimensional accuracy of a hole, and reduce the surface roughness of an already existing hole.  Also, you have learned the different ways in which each of these tools differs from one another.

The highlight of the difference between both tools includes the challenges, purpose, the tools used in both, their rate of material removal, the precision of the drilled hole, their ability to influence the length and diameter of holes on surfaces, the process involved in their cutting, and their options of making tapered holes.

To aid your selection, there is also a section that will assist you to make a final pick between both cutting processes. Factors like the nature of the hole and precision were considered. Lastly, there are provided answers to some major frequently asked questions on boring and drilling.