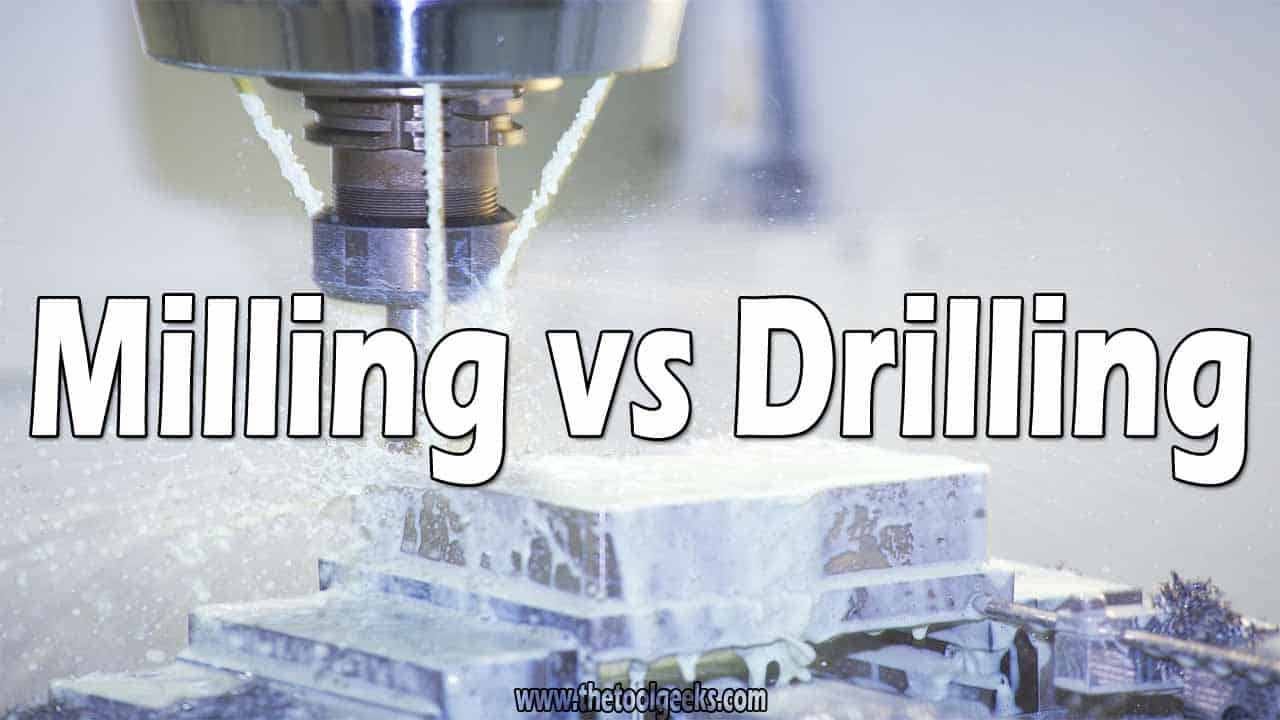 Over time, there has always been a task of recognizing, clearly identifying, and differentiating the milling process from the drilling process. This is due to several reasons, which include the fact that both processes look quite similar.

With no doubt, the milling vs drilling process works almost the same way and their functions are nothing short of being similar. Of all these similarities, the most valid one is that while drilling works on all surfaces, milling can only be carried out on metals.

If you would like to know more about both processes, the tools involved, and other factors that make them different, this article will walk you through all you need to know as it compares both processes in a bid to make their difference apparent.

Also, you will learn the pros and cons of each so you can decide which one to choose for your project.

One of the most common methods of machining a material - that is, a material removal process is milling. It is a way of creating various features on any part or surface by cutting away unwanted material.

If you wish to create or produce parts that are not axially balanced but feature holes, pockets, slots, or even 3-dimensional surface contour, then milling is the ideal process to carry out. Milling is also applicable in the construction of tooling for some other processes.

In addition, it is often used as an alternative process in adding and refining features on parts whose mode of manufacture is completely different from each other. Milling is also suitable for adding final touches to a completed project or a part whose basic outline has previously been formed.

There are about four commonly used terms in the milling process, they include; Load time, cut time, idle time, and tool replacement time. Following the above four processes, there are no post-processing to perform but in a bid to improve, beautify, and add finishing touches to the material, some secondary processes may be carried out.

Drilling is a method of making holes on surfaces. It can be referred to as a cutting process where a drill bit is used to cut certain holes in solid materials- including rocks. However, the type of drilling depends on the nature of the solid materials to be drilled. 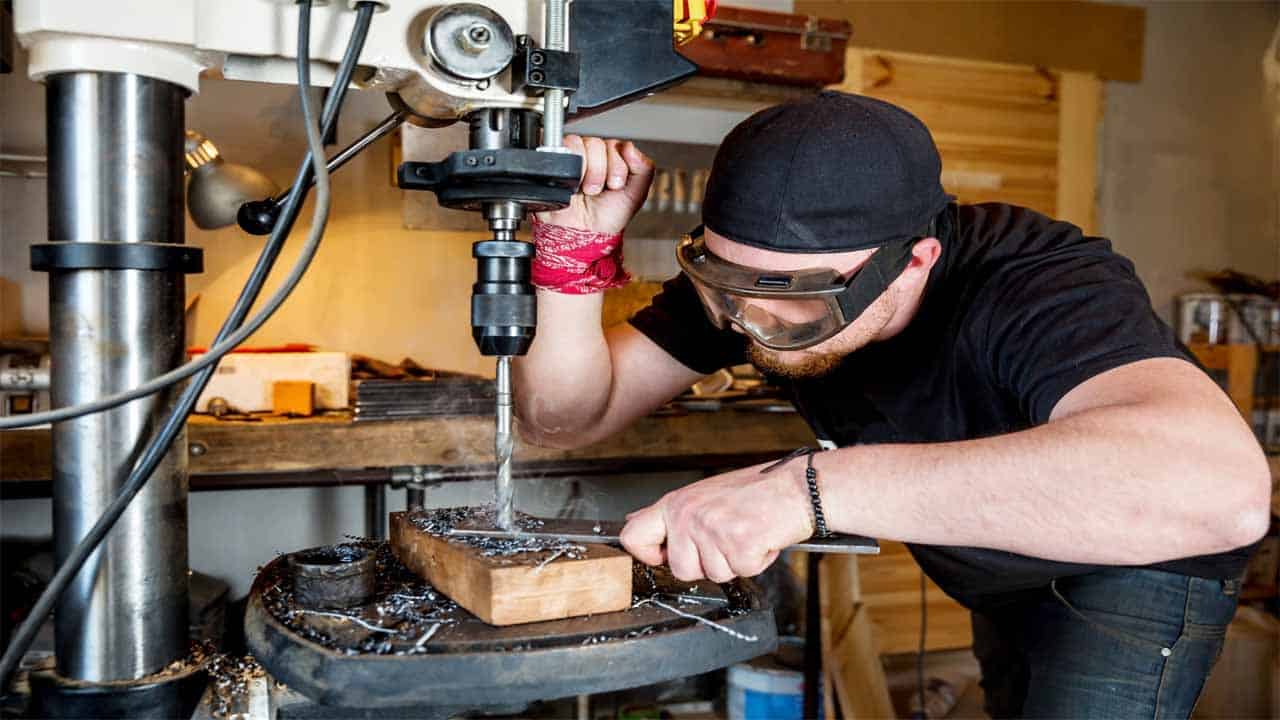 One of the downsides of drilling is that it could affect the mechanical properties of the material that has been drilled. It leaves low lingering lines around the opening of the hole making the material a bit deformed and oftentimes lead to a total deformation in a part of the material.

That is why to make drilling worth the process, a finishing process must be done after the drilling process to cover up the deformed signs.

There are different types of drilling, which include space drill, indexable drill, etc., and which to embark on depends on the nature of the project at hand.

Some also different styles can be employed in the drilling process and each style has specific features they offer. Some of these styles include; spot drilling, center drilling, deep hole drilling, gun drilling, and many more.

Also, counterboring, countersinking, boring, friction drilling, and reaming are the related processes that accompany the process of drilling.

Milling vs Drilling (Head to head)

Having known what each of the processes entails now is the time to make a comparative analysis showing their differences.

One of the notable differences between both processes is their movement. In the drilling process, the drill moves in an “up and down” motion, with the drill bits making a series of spins to create holes on surfaces.

The movement in the milling process by the milling machine is also similar to this. In addition to the up and down movement, they also move sideways in case there is a plan to widen the hole or create a tapered hole.

Another difference between the tools used in both cutting processes is their flexibility with each other. With the milling machine, you can use a drill bit to cut up and down while drilling a hole.

However, with the drilling machine, you cannot be availed of the opportunity of cutting horizontally or sideways using the milling machine.

From this, suffice it is to say the milling machine has a wider range of use than the drills. It will not be mistaken also to say that milling machines have a more secure hold for fastening the drill bits.

Ease and Convenience of Use of Tools

Drilling or making holes is hard work on its own and using a tool that is not convenient will make it more complicated. That is why comparing the tools used in both processes, it will be observed that the tool used for milling is more convenient than that used for drilling.

This is because the majority of the milling machines have tables that help secure the material or surface to be worked on into place. In the case of a simple drill press, however, there is no table to hold the material into place and this makes it a bit strenuous to use.

A big compact drill when paired with a drill press will be mobile - easy to transport and handle, while the smallest of the milling machines would still be bulky, with no option of transportability, mobility, or even fit into a backpack as it could have been the case when it comes to a portable battery-powered drill.

The level of advancement in technology these days has led to a series of progress in the development of various cutting tools, used in workshops and construction sites. The result of this can be found in the milling machine as it can now be operated with the computer these days.

Unfortunately, this significant development has no impact on the tools used for drilling because the drill presses today still uses the manual movement method when there is a need to switch the placement of the table and in the process of operating it.

This manual method of moving tables is the reason the milling process produces more accurate cuttings than the drilling process.

Related Read — How to Drill Into Plexiglass?

Should I Go For Drilling Or Milling?

Either you are new in the industry or just a committed DIY trying to figure out which of the two actions to embark on for your next set of construction projects or repairs. This section will help you fathom that. Truly, their basic functions are similar but they are both useful for different projects.

Depends On The Project Size

Before making a pick between the two processes, you need to consider the magnitude of the project you are about to execute.

How big is the project? Within what period do you wish to complete it? Which tools are readily accessible to you? You should ask yourself these few questions before embarking on any of the two processes.

Related Read — How to Drill Into Metal?

Depends On Your Budget

In addition, you should consider your total budget for the project. Likewise, you need to consider the level of experience of the workers who would assist you in executing the project.

Can they operate computer-controlled machines or they are only versed in manual tools? This is because some tools can only be used with the computer while others can still be operated manually.

Nonetheless, regardless of either of the processes you finally decide to settle for, you are sure to enjoy maximum and high-quality delivery.

Now that you know about both processes, it is normal you have a couple of questions to ask. Apart from questions, you could also doubt any of the information posted above.

We have compiled a list of some frequently asked questions over time with the hope that they would to an extent provide answers to your many questions.

While this may be a tricky one to answer, what determines the cost of carrying out either of the two processes is the magnitude of the project. Are you executing a small or large project? The answer to that would determine which of the process is worthy of adopting concerning cost.

Can Milling Be Used for Drilling?

Yes, the milling machine can be used for drilling because of its versatility. In addition to drilling, it can also be used for boring, cutting gears, amidst other functions.

Can a Milling Machine Replace a Drill?

From this article, we have been able to make a comparative analysis by comparing the milling vs drilling process. Both processes were explained and detailed information given about them.

Also, the tools used in both processes were stated, and to make your task easy, there is a section on frequently asked questions where you can consult should the need be.

This guide is such that whenever you find yourself in a tight angle and confused as to which of the two processes you should apply in your project, you would have little or no problems making a pick.