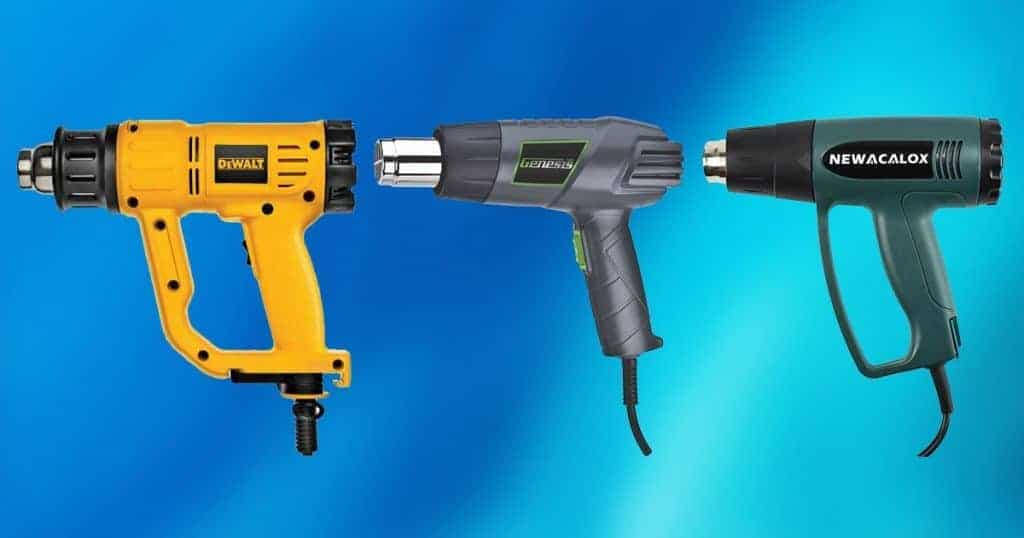 As you may know from reading our blog, we work a lot with heat guns. Since our job allows us to try different heat guns we decided to compare the top 5 best digital heat guns with LCD display.  So, if you are thinking of buying a heat gun, we we recommend you to buy a heat gun with digital temperature control and LCD display instead of any old heat gun.

What are digital heat guns?

Sometimes heat guns are called “digital” if they have an LCD display, variable temperature control, multiple temperature increments, and temperature/airflow control buttons.  But they will still heat the same as “analog” or “non-digital” heat guns.  That said, digital heat guns do have some advantages such as greater versatility, ease of use, precision, and price. 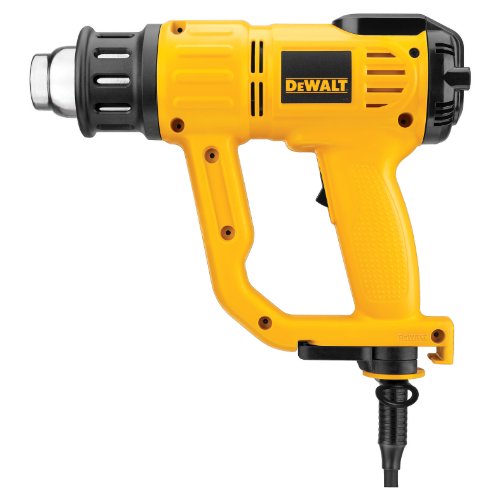 It has a temperature range of 120 to 1100 degree F with 2 fan speeds.  The LCD display is at the top of this tool, and it shows you what temperature is blowing at that very moment. Under the LCD display, it has two really big buttons (+,-) which I find really easy to click if you are working with one hand.  You can adjust the temperature in 50 degree increments with each click of the those buttons.

What I really like about this model is its dual handles and innovative kickstand that prevents tip over.  It has the “build in” feature that allows you to put it on its back safely when you want to rest your hand after a long time using it. I mostly use this feature when I want to cool down the heat gun and especially I use it when I need an extra hand to hold the object.

This model has built-in-in “overheating protection’ which means if it reaches a temperature that it can’t handle then this feature kick in and stops the heat gun automatically to prevent burn up.

Plus, this heat gun weighs only 2.1 pounds and comes with a really large cord that is 10 feet long, which makes it easier to move around on your house without needing to plug and unplug it.

To wrap it up, DeWalt provides the gun with a Cone and a Fishtail Surface nozzles, a.

The only things I wish they would improve is to add a Cool-Down feature (instead of just turning off the gun) and include a storage case (available separately). 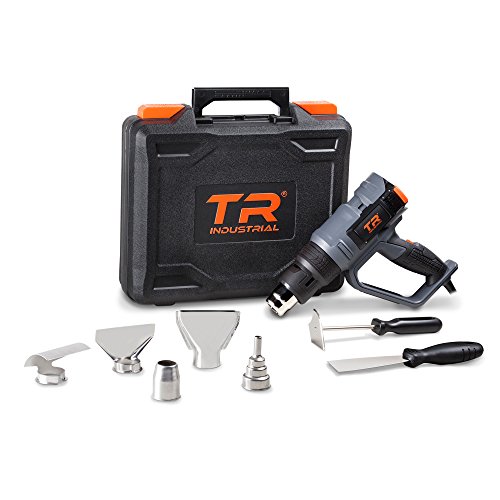 This is what I call a “digital heat gun”, because not only it has an LCD display that shows you the temperature, but also has a memory, that allows you to save up to 4 different temperature setting that you can later use. I really find this helpful when I’m working on a similar object that needs the same temperature.

The temperature range that this model offers starts from 120 degrees and goes up to 1200 degrees. Which you can adjust by clicking buttons near the LCD display. This model not only has a really big temperature range but also heats up really fast, and all this thanks to the powerful motor inside it (1700 W). Usually, it heats to its fullest temperature in less than one minute. Which is really fast compared to some other models.

I find this heat gun really lifelong since it has the “Over Heat Protection” feature. Most of the basic heat guns get damaged by their own heat. Usually, when you work for a long time with heat guns, their heating system gets damaged. But this feature prevents that from happening. If the heat gun reaches a temperature where it can damage the heating system then this feature kick in and automatically stops heat gun and prevent burning.

Another thing I like is that the gun has dual handles and comes with a really cool heavy duty carry case. Which also comes with all accessories needed to work on different objects such as multiple nozzles (fan nozzle, glass protector, cone nozzle, spool reflector, reducer nozzle), a putty knife and a handheld scraper.

Some users have reported that the temperature memory settings may stick and the only way to resolve is to turn the gun off/on again, but I haven’t experienced that issue.  Plus this to 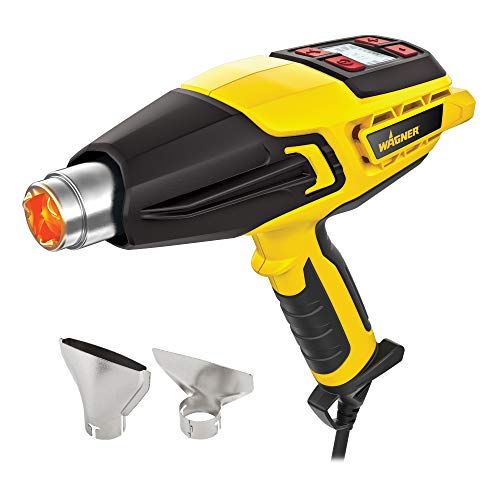 A good heat gun with temperature reading is this one, the Wagner 0503070 FURNO 700. I have used this heat gun, mainly for paint removal, heating up hot melt glue, car window tinting, and other tasks.

The digital control and surrounding rubberized push buttons that allow you to change the temperature from 125 degrees to 1300 degrees F and the 5 fan speeds are very easy to use.  And the LCD is on the top of the gun for easy viewing.

My favorite feature of this model is the ability to change the temperature setting in 10 degree increments, providing you a total of 117 different temperature settings for amazing versatility!  Plus this model heats up very quickly and blows cool air during the cool down process.  Of course this model has the built-in “overheating protection” to ensure continued durability.

The FURNO 700 has a powerful enough 1500W motor and protective “heat-bars” built into it’s sides in case you need to lay the gun down on it’s side.   Add the integrated kickstand and you have options for hands-free operation.  But you may be able to just hold the heat gun as long as you need it, with its light weight of 2.75lbs.  The two (2) included nozzles of the Glass Protector tip and Flare nozzle will enable a variety of uses.  Once  you are done and the gun has cooled down, hang it with the built-in hook.

Unfortunately, this model doesn’t come with a case, but its double boxed and well packaged for shipping. 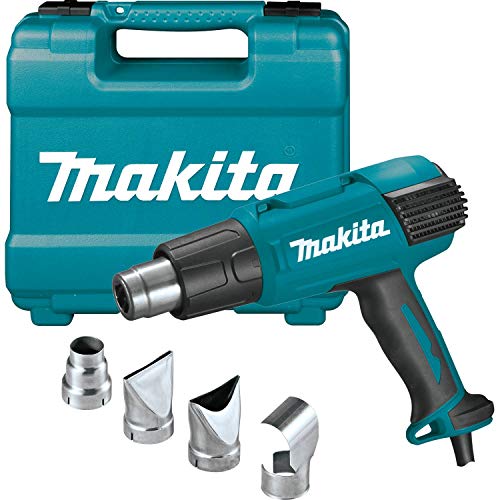 A similar heat gun to above one  the Makita HG6530VK Variable Temperature Heat Gun.  It’s a more powerful one with a 2000w motor, a temperature range of 122 degrees to 1202 degrees F, and 3 airflow settings.  The LCD and temperature buttons are its back with the fan speed buttons on the rubberized pistol-grip handle.

My favorite features of this model are the ability to change the temperature in 50 degree increments and it’s very quiet operation.

Usually, this heat gun heats up to the fullest temperature of 1202 degrees(650) in less than a minute.  And don’t worry, it comes with overheating protection built-in.

Using it in your home is good since it comes with a 6.6ftcord which makes it easy to move around in your room with it.  While the temperature buttons and LCD display on the back, this heat gun also has molded bars around those buttons to enable you to stand the gun on it’s back for hands-free operation.  And once you are done, you can hang it with with its built-in tether notch at the bottom of the handle. 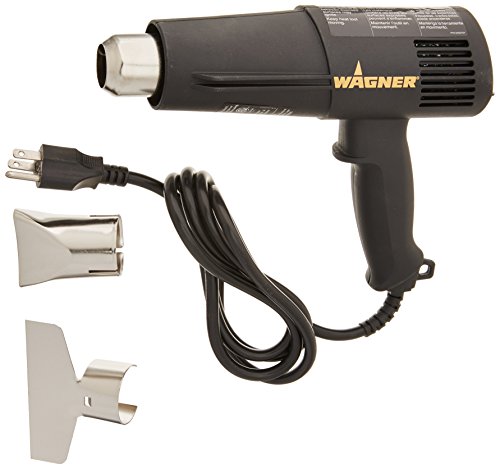 I like the Wagner 0503056 MotoCare Variable Temperature heat gun especially for automotive and garage-type work.  For those of you who have experience with other Wager heat guns, this model is similar to their home series HT1000 model but has more temperature setting options.

My favorite feature of this model is its touchpad buttons around the LCD display for precise adjustments.  Plus it is lightweight at only 1.7lbs and has an ergonomic handle for longer-term holding.

Its a powerful heat gun working at 1500W, which provides quick heating times.  Plus it has overheating protection built-in and an automatic timed shutoff feature.

There’s built-in hook is smaller on this model but it does come with a storage case, and 2 nozzles of the Glass Protector and Flare types.  Some users have reported lower fan speeds but it has been sufficient for my uses.

How to choose the best heat gun with LCD Screen? Buyers Guide

If you still haven’t decided if you should buy one or which one you should then ask your self these questions so you can know how to choose the perfect heat gun for you.

Why should you buy a heat gun with temperature control?

As you have seen from our top picks, all of them are heat guns with temperature control, but why should you choose them? Easy, the name it self-tells you why.

Let’s just say you need to work on a sensitive object, and if your heat gun doesn’t have temperature control you will just be directing 1200 degrees to a sensitive object. Can you imagine how fast would that object get overheated and destroyed?

Now, having a heat gun with this feature will prevent this from happening, depending on the model you are using, you can increase/ de-increase 50 or 20 degrees each time with this feature. Which allows you to use an exact temperature and to warm up the object before working on it.

Do you really need the best Variable Temperature Heat Gun with LCD Display to complete a task?

And having a heat gun with variable temperature allows you to work on different objects, without making you go buy a smaller or bigger heat gun to do the job. Of course, all of our picks have this feature.

Can I use heat guns with an LCD screen for different tasks?

Yes, you can use them for almost everything. I personally have used it on different objects and projects. I have used these heat guns to remove paint, shrink wrap, fix phone screens, etc.

What does the digital heat gun with LCD display do differently?

So, can you afford to destroy expensive objects just because you wanted a basic heat gun instead of the variable temperature heat gun that comes with LCD? Of course not. Not only you can see what temperature is heat gun blowing on the LCD display, and you can increase it and decrease it.

I know that some of the basic heat guns have these features too, most of them have 2 temperature ranges, where you can change it to one or another. But, the difference is that there you can choose let’s say 400 degrees and 1200 degrees. You can’t choose more or less.

Does the temperature-controlled heat gun come with different features?

This is extremely helpful when we are short on time because as we know if you put heat guns in its place while it’s still hot may damage the box or place we put it in.

Have you ever bought a new heat gun, and after 2 months of using it, it just stopped working? We all have been there and that is mostly because the inside part of heat guns can’t handle a lot of heat for a long time. Now there’s a solution to that. Most of the new heat guns come with the feature called ” In-Build Protection”

Yes, all of our picks are variable temperature heat guns, which basically allows you to adjust the temperature for your own needs.

Here’s my list if you are ready to buy: